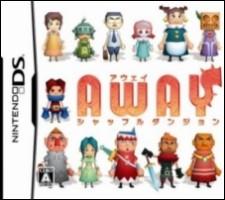 Virgin PLAY sent out a press release today confirming that they will publish AQ Interactive/Mistwalker's Away: Shuffle Dungeon in Europe this fall. They say they're releasing it in "the PAL territories," so Australia is a possibility as well.

The press release is unusually interesting, as it provides the first official English-language details of Away's storyline. Away: Shuffle Dungeon is the story of Webb Village, a small town whose residents disappear randomly, a phenomenon known as Blue Dragon Away. After a girl named Anella gets "awayed" in his place, a young man named Sword finds himself the only remaining resident of Webb. Sword must enter the "Shuffle Dungeon" to rescue the villagers.

And then the dungeon shuffles. Obviously.

In this article: aq-interactive, artoon, away, away-shuffle-dungeon, dungeon, mistwalker, rpg, virgin-play
All products recommended by Engadget are selected by our editorial team, independent of our parent company. Some of our stories include affiliate links. If you buy something through one of these links, we may earn an affiliate commission.
Share
Tweet
Share