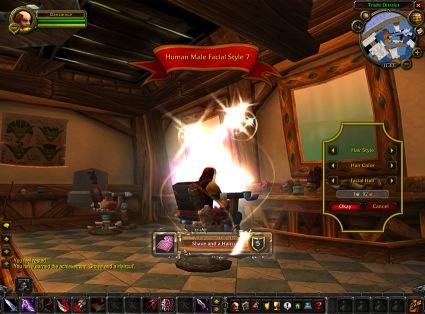 The biggest news of the day so far would have to be the Achievements system. Linked within Blizz's Achievements page is the screenshot you see above (click to embiggen), which contains some interesting new hints for the highly anticipated haircut system that we'll be getting access to in Wrath:

Alright, there's not a lot there, and as the beta has not even begun yet any of this may well change (especially the price), but it's something. By the way, does anyone have a clue as to what the icon on the top-right of the minimap is? That's where the sun/moon icon usually goes. David hazarded a guess that it's a picture of a window, indicating that you're inside; my only theory is that it's the icon for the Achievements interface, though it's oddly big and in a strange place.

In this article: barber, barbershop, hair, haircut, haircutting, hairstyle, wotlk, wrath, wrath-of-the-lich-king
All products recommended by Engadget are selected by our editorial team, independent of our parent company. Some of our stories include affiliate links. If you buy something through one of these links, we may earn an affiliate commission.
Share
Tweet
Share