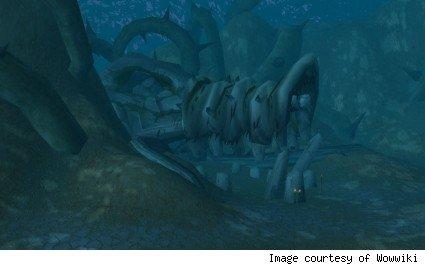 Welcome to Know Your Lore, where each week Alex Ziebart brings you a tasty little morsel of lore to wrap your mind around. Sweet, sweet lore. Mmmm. Have suggestions for future KYL topics? E-mail us! Or, if you have a question for our sister column Ask a Lore Nerd, e-mail us those, too!

Most of us probably know the Barrens as the far, far too big and empty zone that we all spent too long running through. I know I do. You whippersnappers these days and your three flight paths. In my day, we had one and we ran to Ratchet on foot every single time. You kids nowadays have it easy. All of that aside, though, did you know it was originally a lush forest, some of which was part of the ancient Kaldorei territory?

It used to be a much more peaceful (and tolerable) place than it is now. Of course, we're talking ten thousand years ago. That place totally sucks now. Don't get all sentimental on me and pretend it's deep and meaningful and spiritual to quest there or something. It's horrible. Let's learn about it anyway, because learning is fun! ...Right?

Okay, back to that 'ten thousand years ago' bit up above there. By now, if you read this column on a regular basis, you should know what happened that long ago: The Sundering. It was in the War of the Ancients that the Barrens started its fall from verdant forests to baked earth. While by now we know what went down during that war, as we've detailed so many times before, you can see remnants of the events right within the Barrens. Other places as well, but we're talking about the Barrens right now, aren't we?

In the deep south of the Barrens, one will find the Quilboar seat of power, Razorfen. Razorfen is founded upon the remains of the demigod Agamaggan, an ancient lost in the War. Agamaggan was, as you'd expect form a god worshiped by the Quilboar, a great Boar god. His appearance was a bit closer to the felboar you'd find around Hellfire Peninsula and less like the ones you'd find in Westfall due to the spines upon his back, but he definitely was not demonic in nature.

Upon his death at the hands of Mannoroth and the Burning Legion, it was said that where his blood spattered on the ground, thick thorny vines grew. If you've ever been to Razorfen, or anywhere else in the Barrens, you've likely seen them. Unique to Razorfen Downs, however... if you've been there, you've seen Agamaggan. His remains are the shell of the Downs, and it is through his skull that you enter the Quilboar 'city.'

In addition to the Quilboar worship of the boar god, it is possible they've allied themselves with the Scourge, though that's a bit of an aside. There is no definite answer to this or whether it's particularly widespread, but there is no doubt that the Scourge have a presence within Razorfen and at least some of the Quilboar support it. It's thought that the Quilboar might worship Harpies as well, since paintings of harpies are spread throughout Razorfen, but that's a complete unknown. It could just be a random decoration the Blizzard artists slapped up there, or the paintings could depict Aviana.

Aviana is another ancient you will see some remnant of in the Barrens. It's not entirely known whether or not harpies descended from Aviana, but it's a very popular theory, and a pretty strong one. Aviana began as a simple raven, and was chosen by Elune to be her personal messenger to Malorne and Cenarius. Over time, she was empowered further by the demigods so she could continue her work for all of them, eventually ascending to demigod status herself and given dominion over G'Hanir, the great tree that acted as the sky's Heaven, where all flying things went when they died.

Of course, until Aviana was slain by the Burning Legion. G'Hanir died with the demigoddess. Most of it, anyway, but that's also a story for another time. Popular theories for the Harpy race is that they're either descendants of Aviana like the dryads are daughters of Cenarius, or harpies were originally Night Elves that gave themselves to Aviana's cause. Either way, if they do have their origins in Aviana, its clear that they've given themselves to a more primal, chaotic nature since her death.

Speaking of Cenarius and the Dryads, Agamaggan and Avian aren't the only demigods that have left their mark in the Barrens. Though their seat of power isn't found here, the centaur tribes have certainly moved into town since the War of the Ancients. As you might have read in our edition on the Elemental Lords, the Centaur are the spawn of one of Cenarius' sons and the daughter of an Elemental Lord. Elemental Lordess? Elemental Lady? Man, who cares, Elemental Lord. As I said, the Centaur didn't originate in the Barrens. Their holy place and place of birth is actually Maraudon in Desolace. Still, they've definitely played a role in what the Barrens have become. It could be said that the Centaur played a role in the formation of the Horde, too. Were the Centaur not hunting down and slaughtering the Tauren, there's a very, very good chance that Thrall would have never met Cairne Bloodhoof. Just goes to show you that the 'minor' players have played a pretty pivotal role in setting up the current day Azeroth, not just the PC races.

In much more recent times, Dwarves from Ironforge have declared a plot of land in the Barrens as their own: Bael Modan. Bael Modan certainly hasn't been formed due to any events during the War of the Ancients, but actually reaches back much further. Its founding was inspired by the Ironforge Dwarves urge to discover their origins and ties to the Titans. Their findings are vague, but according to sources outside of the World of Warcraft itself, it's a settlement of nearly 1,000 Dwarves, Gnomes, and assorted others. The Dwarves don't really rank up there with the Quilboar, Harpies and Centaur for how strong their ties to the Barrens have been in the last few thousand years, but the Titan presence in the Barrens of old is undeniable, given the remains you can see in the digsite yourself.

The Silithid, too, herald from a much older time. While their presence in the Barrens is pretty recent, their origins are in C'Thun and the Old Gods, who are as old as (or older than) the Titans themselves.

Before the coming of the Orcs (and Dwarves and Humans) into the Barrens, the Harpies, Quilboar and Centaur had largely filled the void left in the region after the War of the Ancients and the Sundering turned the lush forests (and possibly jungles) into charred, baked earth and little more. Recently, there's no doubt the Horde have started dominating the area. As demonstrated by Bael Modan, and to a lesser extent Northwatch Keep, everyone has at least a little interest in the area despite that dominance, whether it be for military purposes (Northwatch), archaeological purposes (Bael Modan), or simple trade (Ratchet).

So, as you can see, the Barrens are absolutely steeped in history and lore. A lot has happened here or is tied to this place, and many of the branches of Kalimdor history directly point to or from the Barrens.

That doesn't mean it's any less boring to quest there. 62
In this article: agamaggan, aviana, bael-modan, cenarius, centaur, crossroads, dwarves, harpies, harpy, kalimdor, malorne, old-gods, quilboar, ratchet, silithid, tauren, the-barrens, titans, tweet-this
All products recommended by Engadget are selected by our editorial team, independent of our parent company. Some of our stories include affiliate links. If you buy something through one of these links, we may earn an affiliate commission.
Share
Tweet
Share