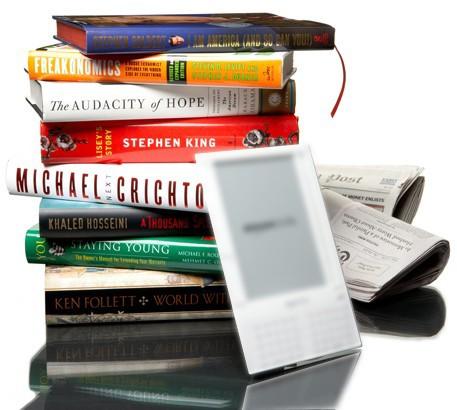 Like the 1st generation Kindle unearthed by Engadget snoops way back in September of 2006, Amazon's having a tough time keeping the lid on its 2nd generation e-book reader. Seems everyone and his analyst brother is confirming a new, larger screened collegiate reader and at least one other variation, presumably the Kindle 2.0. Now BusinessWeek steps up and "confirms" the collegiate reader while claiming knowledge of a new 2.0 base model that, "is significantly thinner, has a better screen, is more stylish and includes fixes to some of the user interface annoyances," such as the placement of those massive page forward / back buttons which can trigger inadvertent page changes. In fact, their source claims that the new version is much more than an iterative evolution, "They've jumped from Generation One to Generation Four or Five. It just looks better, and feels better." BW also claims that the new model's price (currently, $359) will hit $299, "or maybe $249," and could be announced as early as September.

Interestingly, Kindle 2.0's design is being lead by a designer hired from the powerhouse shop, Frog Design. A group which just happened to give the Kindle a very public and very critical tongue lashing at its November 2007 launch. We guess this squeaky wheel received its oil in the form of a giant cash payment.

Read -- Frog's take on Kindle 1.0
Read -- BusinessWeek rumor
In this article: amazon, e-book, frog design, FrogDesign, kindle, kindle 2.0, Kindle2.0
All products recommended by Engadget are selected by our editorial team, independent of our parent company. Some of our stories include affiliate links. If you buy something through one of these links, we may earn an affiliate commission.
Share
Tweet
Share