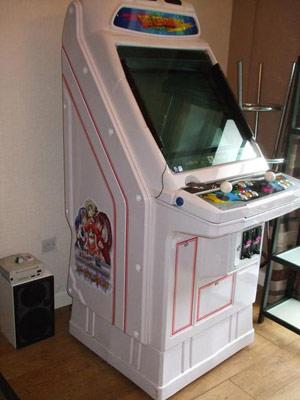 We have to admit, the sight of any arcade cabinet will brighten our day a little bit, but this so-called C-MACC's (Complete - Multi Arcade Console Computer System) cabinet built by Over-Clock UK forum member Mayhem is a considerable cut above the rest, with it not only able to play every emulated game out there, but seemingly every non-emulated game as well. That, as you might have guessed, was done by cramming a PS3, an Xbox 360, a Wii and a few other consoles into the cabinet alongside a decently-spec'd PC, with some authentic arcade controls nicely rounding out the rig (it even has some side-mounted buttons just for pinball games). All told, Mayhem apparently sank £5,000 (or about $8,900) and a few months of his life into the project, but he doesn't seem to have any regrets, and we certainly can't blame him. Hit up the link below to catch up with the project from the beginning.

[Thanks, Michael]
In this article: arcade, arcade cabinet, arcade mod, ArcadeCabinet, ArcadeMod, c-maccs
All products recommended by Engadget are selected by our editorial team, independent of our parent company. Some of our stories include affiliate links. If you buy something through one of these links, we may earn an affiliate commission.
Share
Tweet
Share