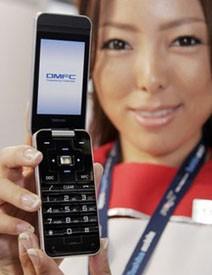 Toshiba continues to tease us with its prototype liquid fuel cell-powered gadgets: last year it was a Gigabeat media player, and at this year's CEATEC you can check out a direct methanol fuel cell (DMFC) that's been crammed inside a cell phone, lending it a robust six hours of talk time (compared to the paltry three or four hours of a traditional battery). Toshiba won't reveal the capacity of the DMFC, but they have said that a 50ml cartridge is good for about 15 refills. No release date yet, but the phone "might" be available "as early as next year." In the meantime, enjoy this picture of a woman holding a flip phone with "DMFC" clearly visible on the display.

In this article: ceatec, ceatec 2008, Ceatec2008, cell phone, cellphone, direct methanol fuel cell, DirectMethanolFuelCell, dmfc, fuel cell, FuelCell, gigabeat, methanol, toshiba
All products recommended by Engadget are selected by our editorial team, independent of our parent company. Some of our stories include affiliate links. If you buy something through one of these links, we may earn an affiliate commission.
Share
Tweet
Share