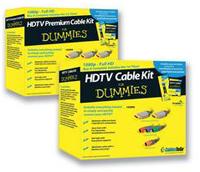 You know, we typically have nothing but respect for the For Dummies line (with one title in particular being our fav), but this is just downright insulting. For those buying a new HDTV on Black Friday or soon after, 4D Global Partners and Cables To Go have linked up schemed to sucker you into buying this pathetic kit for hooking things up. Ironically enough, this supposedly simple package gets confusing right from the get-go by coming in two versions -- as if HDTV newbies will really understand which one to go for. Beyond that, the only difference between the HDTV Cable Kit For Dummies and the HDTV Premium Cable Kit For Dummies is the number of HDMI cables (two and three, respectively). Each box comes bundled with a few basic HDMI connectors, "additional cables required to connect non-HDMI components," reusable cable ties and a booklet that provides vague installation details for a TV you don't actually own. Worst of all, the For Dummies crew somehow got the idea that pricing these at $99.99 and $149.99 (in order of mention) was a bright idea, which makes us awfully suspicious that Noel Lee has his sketchy hands in this somewhere.

In this article: cable, cable kit, CableKit, cables, Cables To Go, CablesToGo, dummies, expensive, hd, hdmi, HDTV Cable Kit For Dummies, HdtvCableKitForDummies, holidaze
All products recommended by Engadget are selected by our editorial team, independent of our parent company. Some of our stories include affiliate links. If you buy something through one of these links, we may earn an affiliate commission.
Share
Tweet
Share