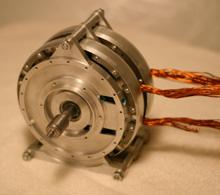 Still addicted to oil like the rest of the world? You might reconsider wind power rehab now that a startup called ExRo has developed turbines that it says are consistently 30% -- and in some situations as much as 100% -- more efficient than the standard kind. The traditionally-used mechanical transmissions have been replaced with an inexpensive electric alternative that can adapt to changes in wind speed more efficiently. Also, many small generators are used instead of a large one, so the turbines can be customized in production to suit the intended installation site. If this is the real deal, it beats the 0.1% increase we saw in solar cell efficiency a few months ago, and those Maglev uber-turbines are still on the horizon. Hey Sun -- jealous yet?

In this article: efficiency, exro, power, turbine, wind, wind power, wind turbine, windpower, windturbine
All products recommended by Engadget are selected by our editorial team, independent of our parent company. Some of our stories include affiliate links. If you buy something through one of these links, we may earn an affiliate commission.
Share
Tweet
Share