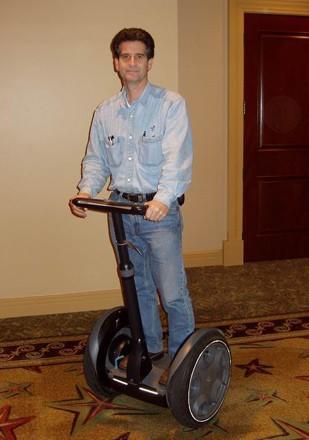 It's something that any hard-nosed entrepreneur likely deals with when their invention / startup is on the edge of fail: should they simply throw in the towel, or forge ahead like no one's looking? The father of the Segway, Dean Kamen, is also wrestling with that question. In a recent interview, he stated: "You end up lying there saying, 'I'm not stopping. It would be an act of shallow cowardice. Or you decide to quit and you say, 'This is one of those ideas that just isn't going to work.' " He also noted that "it's not nearly as glamorous as people think to keep working on something and to keep hitting roadblocks and to keep going." On one hand, we could definitely see the rug being pulled from the two-wheeled transporter that never revolutionized public movement, but considering all the days in which it has lifted our spirits, do we really want it to?

[Image courtesy of SimplyMoving]
In this article: Dean Kamen, DeanKamen, fail, quit, quits, quitting, segway
All products recommended by Engadget are selected by our editorial team, independent of our parent company. Some of our stories include affiliate links. If you buy something through one of these links, we may earn an affiliate commission.
Share
Tweet
Share