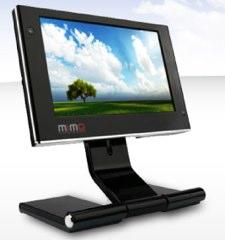 I've been fascinated by these little 7" USB displays since they first started showing up on the gadget blogs a few weeks back. At first it didn't look like they were going to be available in the States, but now Mimo Monitors is preparing to ship a couple of models soon. These little displays connect to your Mac with just a USB cable and provide an extra 800 x 480 pixels worth of desktop space.

Obviously, that's not really enough screen real estate for serious work, but it could be perfect for stashing away palettes or something like an iChat Buddy List. Mimo is offering two model: the plain vanilla 710 for $129.99 and the somewhat fancier 740 which adds a webcam, mic, and touchscreen for $199. Both include Mac display drivers, but if you want the 740 you'll annoyingly have to shell out an extra $30 for a third-party touchscreen driver. Both come with a detachable stand that allows the display to rotated.

Given that you can pick up a full sized 22" LCD for around $200 these days, I can't help thinking these Mimo's are over-priced. On the other hand, if you don't have another display output or if you want to turn your iMac into a replica of the Space Shuttle cockpit, these might be just the thing.

In this article: mimo monitor, MimoMonitor, usb display, UsbDisplay
All products recommended by Engadget are selected by our editorial team, independent of our parent company. Some of our stories include affiliate links. If you buy something through one of these links, we may earn an affiliate commission.
Share
Tweet
Share