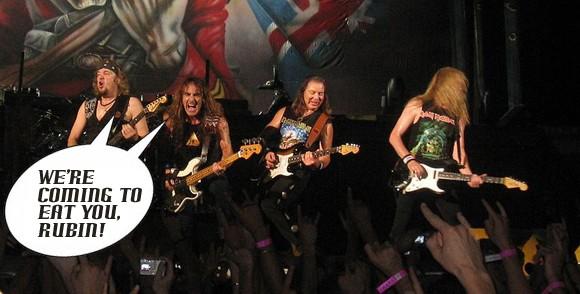 When former Naughty Dog chief Jason Rubin rolled out of bed this morning, we imagine he had a lot on his mind: What cereal to eat, what paper to read, and, oh yeah, how best to deal with lawyers representing Iron Maiden. According to online rag TMZ, the aging metal band has filed suit against Rubin's comic book company, Iron and the Maiden LLC, for what the site describes as using a "confusingly similar" name. We admit we were befuddled at first too; after all, who knew that Iron Maiden was even still around?

Rubin, who has not yet responded to Joystiq's inquiry on the matter, is best recognized in gaming circles as the face behind Crash Bandicoot and Jak and Daxter. Lately, however, his energies have been spent elsewhere after leaving game development in 2004 for social media, comics and the greener pastures of Web 2.0. Still, judging by Iron Maiden's catalog of album covers, we're not sure how any of this could have prepared him for facing down a gang of haggard rockers and what we imagine to be a throng of undead legal counsel.

Update: A spokesperson representing both Jason Rubin and his companies, Iron and the Maiden LLC and Morgan Rose LLC, sent over an official response to the lawsuit this evening, calling the whole case "completely without merit." The complete statement can be read after the break.

"The defendants' lawyers believe that this case is completely without merit. The defendants find outrageous the band's claim to exclusive use of the well-known term "iron maiden," a medieval torture device that predates rock and roll by centuries and is part of world culture, legend, and lore. The comic book at the center of this case, "Iron and the Maiden," is set in a totally original 1930s alternate universe. The main character, Michael Iron, and his maiden, Angel Chase, are two very different characters forced together by circumstances. The title is a play on the torture device. The defendants maintain that any rational person who looks at the comic book content at www.ironandthemaiden.com will immediately understand how ridiculous the assertions in the band's complaint are."

In this article: comic-books, comics, crash-bandicoot, iron-maiden, jak-and-daxter, jason-rubin, lawsuit, naughty-dog
All products recommended by Engadget are selected by our editorial team, independent of our parent company. Some of our stories include affiliate links. If you buy something through one of these links, we may earn an affiliate commission.
Share
Tweet
Share