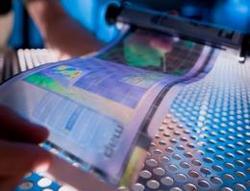 Color e-ink displays are starting to become less of a curiosity and more of a reality, but if the rumor from DigiTimes proves true it's going to be another year or so before we start seeing them en masse. PVI, makers of displays for the Kindle and Sony Reader, has apparently indicated that its attempts at creating a color display have been more or less unsatisfactory and it's going to take until 2010 at least to get its hues sorted out. That's the bad news. There is some good news, though, indicating that Sony's working on its own 8.5 x 11-inch reader utilizing the same screen as the Kindle DX. Since the last rumors about that display was pretty-much on the mark, we wouldn't be surprised if this one proved true as well -- and we can't wait to see what Sony charges for it.

In this article: amazon kindle, amazon kindle dx, AmazonKindle, AmazonKindleDx, color, color e-ink, ColorE-ink, e-ink, kindle, kindle dx, KindleDx, pvi, pvi e-ink, PviE-ink, reader, sony, sony reader, SonyReader
All products recommended by Engadget are selected by our editorial team, independent of our parent company. Some of our stories include affiliate links. If you buy something through one of these links, we may earn an affiliate commission.
Share
Tweet
Share