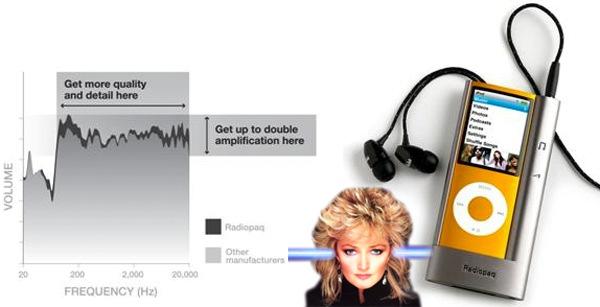 Accessories aimed at the iPod nano 4G crowd are always a curious affair. Isn't the whole point to have your tunes on-the-go, with a minimal of fuss? And aren't costly (and bulky) add-ons the definition of "fuss?" We seriously doubted there was much of a market for the portable speaker attachment we saw a few weeks back, and now it's Radiopaq's turn to get us scratchin' our heads. The iPod Sound Jacket claims to do away with "the distortion that can sometimes result from a static EQ setting" and reveal the "hidden detail in the music that is lost during MP3 compression." In other words, it seems to be a graphic equalizer. One that you have no control over, to boot. Sound familiar? But then again, according to the product literature the device boosts sound quality "up to 60 percent." If only it were able to boost our self esteem by, say, 40 percent or more. Now that would be well worth the £69.99 (roughly $115).

[Via SlashGear]
In this article: ipod, ipod nano, ipod nano 4g, IpodNano, IpodNano4g, nano, nano 4g, Nano4g, portable audio, portableaudio, radiopaq, radiopaq sound jacket, RadiopaqSoundJacket, sound jacket, SoundJacket
All products recommended by Engadget are selected by our editorial team, independent of our parent company. Some of our stories include affiliate links. If you buy something through one of these links, we may earn an affiliate commission.
Share
Tweet
Share