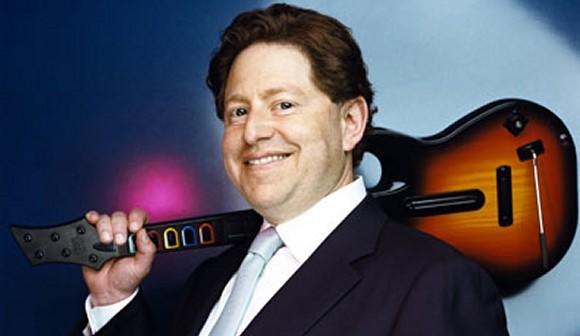 You know those Atari controllers that let you play Atari games without actually having an Atari? That, it seems, is the future of the Guitar Hero franchise, with Activision CEO Bobby Kotick indicating that new titles from the company will be playable "independent of a console." It's perhaps a natural step, as the franchise's developers must surely spend half their time frantically porting games from PS3 to Xbox 360 to Nintendo DS to graphic calculator to... well, you get the picture. Kotick also said some wondrous things that will make those Activision coders slouch even further into their chairs, developers who already were surely fearing for their jobs, indicating that they live within a corporate environment of "skepticism, pessimism, and fear" with the hope of "keeping people focused on the deep depression," and that he wants to take "all the fun out of making video games." So, then, that My Chemical Romance edition of the series should be announced any time now.

[Via Joystiq]
In this article: activision, activision guitar hero, ActivisionGuitarHero, bobby kotick, BobbyKotick, ce oh no, ce oh no he didnt, ceo, CeOhNo, CeOhNoHeDidnt, guitar hero, GuitarHero
All products recommended by Engadget are selected by our editorial team, independent of our parent company. Some of our stories include affiliate links. If you buy something through one of these links, we may earn an affiliate commission.
Share
Tweet
Share