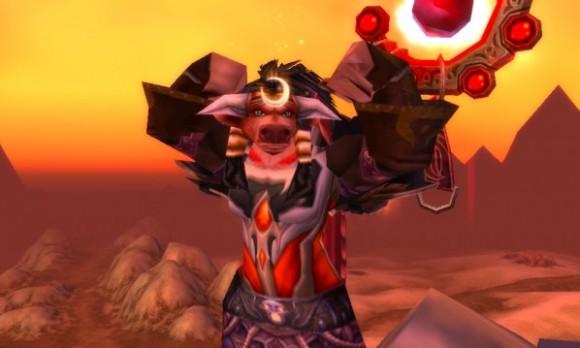 One of the easier ways to distinguish an older character from a reroll or alt is the presence (or absence) of a Feat of Strength. Feats of Strength, remnants of "the past glories of Azeroth," are among the most difficult achievements to get, and that's when they're even possible at all. Most, like the presence of an old-school PvP title, one of the original 100% mounts, or the Vengeful Nether Drake, are impossible to get these days, and are a sign that the person who has them is an experienced player. But with a little luck and a lot of elbow grease, even a new player can accrue some of these supposedly "past" glories.

I started playing WoW shortly after Burning Crusade launched and didn't expect to have a shot at most Feats, but a surprising number of them are still available. After getting The Fifth Element recently and being surprised to discover that: a). It's a Feat, and b). The original quest isn't even in the game anymore (man, I'm glad I'm such a quest packrat), I started nosing around the list of Feats to see what else a player could do even if they're new to the game. Moreover, there are two achievements you can get right now that will become Feats in 3.3, so let's get cracking.

As with my experience from The Fifth Element, it should be said that if you've got older quests leading to achievements or Feats in your quest log, some currently "impossible" achievements are still very much doable. I've even seen players snag the Champion of the Naaru and Hand of A'dal titles months after Wrath went live. While these quests aren't shareable with others (or at least they weren't when I checked with the Hydraxian Waterlords chain), don't write off the possibility of getting Feats or titles as long as you've got older stuff in your quest log.

Timear Foresees and Proof of Demise are going to be Feats as soon as patch 3.3 hits, so if you have any remaining dungeons for either of these achievements, make sure you check back with Archmage Timear and Archmage Lan'dalock respectively every day. Unless you get monstrously unlucky, the dungeon you need should eventually show up as a daily quest before the patch drops. If you have any difficulty getting a group on the particular day the quest you need goes live, keep it in your quest log and turn it in whenever you do complete it -- you'll still get credit.

Most holiday Feats aren't doable these days (e.g., Yellow Brewfest Stein, Clockwork Rocket Bot), but that's a tip-off in itself that Blizzard may be planning to link future Feats to yearly holiday items. Let the player beware.

A Brew-FAST Mount: Every Brewfest, you'll have an opportunity (hopefully several) to coax Coren Direbrew into dropping a Great Brewfest Kodo or a Swift Brewfest Ram. Players who did the original Brewfest in 2007 will probably already have the Ram (which was then buyable with tickets), so there's likely to be less competition for the Ram if it drops.

Rare mounts might be more appropriately termed Feats of Dumb Luck, or -- more commonly -- Feats of Hollow-Eyed Grinding. Very infrequently, you'll get lucky with a mount drop within the first few tries, but otherwise you'll need a fair amount of patience and persistence to nab them. On the plus side, many of the following mounts are now soloable at 80, though (as always) this depends on your class, spec, and gear.

Ashes of Al'ar: If you can convince a few other people to come with you for a Tempest Keep clear (Kael is definitely not soloable at this point in time), you can try to coax Kael'thas into dropping his 310%-speed phoenix. The Ashes are thought to be a 1% drop, so odds are pretty good that you'll not only be at this for a while, but you'll also be rolling against most of your raid.

Deathcharger's Reins: Baron Rivendare's mount from the level-60 Stratholme was once one of the rarest drops in the game at a ghastly 1 in 5,000 drop rate, but these days it's a much gentler 1 in 100. You'll still have to work at it, but with the ability to leave and reset the 5-man Stratholme run, this is now the easiest mount-related Feat you can get.

Fiery Warhorse's Reins: Attumen the Huntsman is the easiest boss in Karazhan, but farming him may require a friend or two unless you're a tank class. The reins are thought to drop at a 0.7-1% drop rate, so don't bank on seeing it anytime soon; after running Kara almost every week for the length of Burning Crusade and sporadically since Wrath hit, I have yet to see it drop once.

Grand Black War Mammoth: The three-person war mammoth drops at an approximate 0.7%-1% rate from all Vault of Archavon bosses (on both 10- and 25-man), but be forewarned -- it's a ridiculously common target for thieves and ninjas everywhere, and it's also one of the reasons we've stopped running news on VoA ninjas in Guildwatch (theft in VoA is really just that common). If you want this mount, hammer out rules with your raid on how to roll/bid on it (if it drops in the first place) before you make the first pull, and make sure someone you trust is the master looter.

Reins of the Raven Lord: This is tricky, and in order to manage it you will need to be a druid or have a druid in your group who's done the Swift Flight Form questline (itself a Feat of Strength) and has the Essence-Infused Moonstone needed to summon Anzu.

If one of these two criteria can't be met, the mount isn't farmable, because Anzu can only be summoned by a druid. The Raven Lord mount drops at an approximate 1% rate from Anzu in heroic Sethekk Halls, so once you've convinced a druid buddy to accompany you on your runs, keep at it.

Swift Razzashi Raptor: The raptor is a 0.7%-2% drop off Bloodlord Mandokir in Zul'Gurub, so -- as with most of the rare mount drops -- it's usually time-intensive to farm. The saving grace of both this and the tiger mount (see below) is that, rather than being on a 7-day reset, Zul'Gurub is on a 3-day reset, so you get slightly more than two shots a week at both. Make sure you're watching your ingame calendar to see when ZG resets.

Swift White Hawkstrider: This only drops from the heroic version of Magisters' Terrace at a 1-2% rate, and soloing Kael'thas is still a pretty tall order for most classes if for no other reason than avoiding (or absorbing) Pyroblast. In order to avoid it, you need to get Kael to 50% within the space of a minute, which will require roughly 1,500 DPS. Sounds easy for a decently-geared character at 80, right? Not so fast. You'll also need to kill the phoenix/es that Kael spawns, kill the egg/s that spawn/s after you kill the bird, move as he summons Flamestrike underneath you, and -- oh, one more thing -- figure out how you're going to live through the fireballs he'll be chain-casting. Paladins can cheese the entire fight through self-healing as necessary, ignoring the DPS requirement, and bubbling through Kael's Pyroblast, but for everyone else, you'll need to bring some friends, be well-geared, do some careful planning, or some combination of all three. If you can get Kael to 50% within a minute, you've pretty much won the fight.

Swift Zulian Tiger: Like the Swift Razzashi Raptor, the Tiger is a rare drop from Zul'Gurub, but you'll find this one off High Priest Thekal -- appropriately enough, the "tiger boss." Depending on your class and access to interrupts, Thekal is either a much easier or much harder fight than Mandokir, but if you can get past phase 1 with his adds, the rest of the fight is very simple.

The Horseman's Reins: As far as I'm concerned, this doesn't actually exist and is merely an elaborate prank of Wowhead's.

Venomhide Ravasaur: In enormous contrast to the irritation and tic-inducing grinds required for many of these mounts, getting the relatively-new Venomhide Ravasaur is actually a joy -- but only for Horde. Start the questline with Mor'vek on the eastern edge of Un'goro Crater whenever you like, and then budget a few minutes each day for 20 days to get your mount.

Why? Because It's Red: Trash mobs in AQ40 drop the zone-only bug mounts pretty commonly, but the red version is most assuredly rare. Sorry, folks -- this one is pure RNG, and it's entirely possible to clear AQ40 several times without ever seeing a red bug drop. I'll grant that scenario isn't likely -- I've done AQ40 a lot, and we typically see one red bug drop per run -- but multiple red bugless runs can, and probably will, happen to you. If you want to increase the odds of your getting the red version with minimal competition, farm and reset the trash mobs at the beginning of the instance (lots of classes can solo or duo this at 80), and just keep at it until a red bug finally drops.

Winterspring Frostsaber: In comparison to the Venomhide Ravasaur quest chain, the Winterspring grind is more irritating but can be a lot faster, because you're not restricted to a single quest per day. Talk to Rivern Frostwind at the extreme northern end of Winterspring, and start grinding.