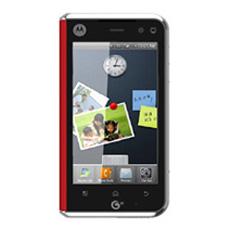 China Mobile is about to spoil its half billion subscribers with yet another Android smartphone in the 3.something-inch category. The Droid's keyboard-deprived younger sibling, the MT710 is about to hit Chinese stores this month, with TD-SCDMA 3G capabilities and OPhone OS 1.5 giving it a distinctly local flavor. WiFi connectivity will also be available, thanks to Moto playing nice with China's new security protocol, and the CPU has also changed to a 624MHz Marvel PXA310 chip, which is growing a bit long in the tooth now. Still, with that dashing red stripe on its side and a presumably thinner chassis, the MT710 just might be somebody's idea of a Droid perfected. You'll find the full specs of the new handset at the Moto Developers links below.

In this article: 3g, android, china, china mobile, ChinaMobile, droid, marvel pxa310, marvell, MarvelPxa310, motorola, motorola mt710, MotorolaMt710, mt710, ophone, ophone os, ophone os 1.5, OphoneOs, OphoneOs1.5, pxa310, TD-SCDMA, wifi
All products recommended by Engadget are selected by our editorial team, independent of our parent company. Some of our stories include affiliate links. If you buy something through one of these links, we may earn an affiliate commission.
Share
Tweet
Share