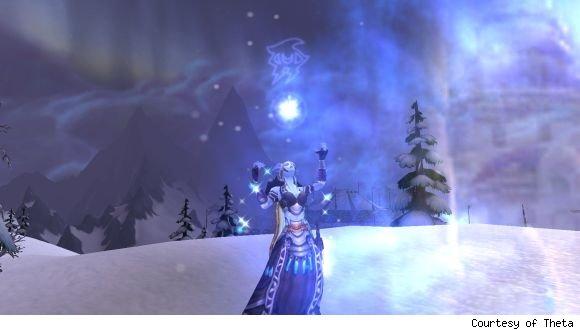 Every year, as the end of that twelve-month block draws near, Arcane Brilliance likes to take an unbiased look back at the events that captured our collective imagination. Heh. Get it? "I-MAGE-ination?" Holy crap Arcane Brilliance is clever. And indefensibly fond of bad puns.

So what did the year of our lord 2009 hold for those of us who prefer the scent of barbecued sheep to pretty much any odor ever and think strudel is a perfectly acceptable meal choice for breakfast, lunch, dinner, and a meal I like to call the "Evocation's-on-cooldown-snack?"

Join me after the break for all the highlights, presented in vaguely chronological order.

The end of polymorph as we know it

As 2008 wound down and 2009 wound up, mages everywhere began hitting level 80, jumping headlong into end-game instances, and discovering one thing:

Nobody wanted us to sheep anymore.

At first, this was a nice change of pace. With Wrath of the Lich King in full swing, a new party dynamic was emerging. Tanks in this new expansion seemed fully capable of holding the attention of multiple mobs at once, and healers seemed fully capable of keeping them from dying despite the increasing size of these pulls. Mages might try to sheep something, but immediately find that sheep broken, and nobody seemed to mind the extra mob running amok. Great, right? We could concentrate fully upon the three things we do best: blow things up, then blow them up again, followed by drinking. It was the dawning of a new era where the only thing the DPS was expected to do was DPS.

So what has changed in the 11 months since? Nothing. I was in a Heroic Pit of Saron group last night, where the large pulls just prior to the ice tunnel gauntlet weren't going especially well. The priest suggested that perhaps he could shackle one of the mobs. The death knight tank seemed almost offended. It was as if the very idea of crowd control was an affront to his tanking abilities.

I know I'm not the only mage that feels like a part of me--the change-a-warlock-into-a-sheep-iest part, in fact--has died. Though not having to focus on a mob and keep that mob polymorphed does free me up to focus on my e-peen, a layer of the conjured pastry that makes up a mage is missing.

The good news? The spirit of sheepcraft lives on...in PvP. Anytime I miss the exquisite sensation of rearranging the molecular structure of something, I need only head to my nearest Arena or Battleground, and viola! I have more crowd to control than I could ever want. At least it gives me an opportunity to dust the cobwebs away from that button on my action bar, right?

For a very long time, Blizzard had been promising to make spirit a decent stat for mages. It was on all of our gear, but did us almost no good. Their solution came in this patch: Molten Armor. Instead of giving us a flat crit chance buff, this armor spell was reworked to scale that crit buff to a percentage of our spirit stat. This was a nerf for most mages, but as the year has gone by, and our spirit numbers have skyrocketed, it has become a sizable buff.

Dual specs brought us the ability to have both a DPS spec and also a DPS spec, Uduar delivered a fat stack of new loot pinatas for us to beat mercilessly until they gave up their bounty, and the Argent Tournament gave us a fat stack of daily quests to sink our precious time into for the next several months and beyond. Nothing says "mage" like being mounted upon an armored steed and handed a lance taller than we are, or in the case of Gnome mages, taller than our entire population stacked on top of each other in a giant, magical Gnomish tower.

Um...we got...well there was...and...yup. Arcane Blast's mana cost got lowered! Replenishment got nerfed! And Invisibility could no longer be interrupted by damage during its fade-out! Whoo!

At first, as this patch hit the PTR, there wasn't much to get excited about. But then we got this little bombshell:

It inspired me to write a song, which I still hum in the shower to this day. As the patch's PTR cycle drew to a close, we got several more minor changes, but the Living Bomb buff was (and still is) the real highlight for mages in this relatively subpar patch.

I get honored with an in-game NPC

Yes, it's true. I just noticed it last week. I was stumbling drunkenly around Dalaran when I came upon a bald guy in purple robes standing on Krasus Landing. Apparently he sends you to Sholozar Basin? And then shows up in Ulduar? Oh who cares. The important thing is his name:

Now take "Pentarus." Remove the R, U, and E. Move the A two letters to the left. What does that spell? That's right, it's Archmage Pants. What a subtle tribute to me! Thank you Blizzard! What's that, you say? Pentarus has been in the game longer than I've had that nickname? I just chalk that up to foresight. Blizzard knew I was going to get the name. Perhaps they were even behind the nickname? I don't know. All I know is that I now not only have a pair of in-game slacks named after me (as well as an actual belt), I also have my own NPC. I will continue to believe this until I leave depart from this mortal frame and go to that great portal in the sky.

Seriously, if you'd have told me a year ago that in only a few short months, Blizzard would make the already incredible Missile Barrage talent several times more awesome, I'd have crapped myself in delight. By allowing the talent to also remove the mana cost of Arcane Missiles, as well as raising the number of times Arcane Blast could stack from 3 to 4, Blizzard buffed the Arcane spec both in DPS and mana efficiency, bringing it right to the top of the mage spec hierarchy in one patch. Since this is the spec I play most, I was noticeably excited.

Plus, we got to fight Onyxia again, and everybody loves a good mage-vs.-dragon showdown.

The Cataclysm announcement brings us the promise of more mages

Oh and the rest of this expansion, announced at Blizzcon, also sounds good. This also marks the first official meeting of IHATEWARLOCKS, a contingent of mages that meets whenever we feel like it. The meetings take place on the weekends (usually), and only exist on the internet. Fun fact about these meetings: I'm almost never wearing pants.

Blink gets fixed, sort of

This dropped in 3.2.2, but so stealthily that most mages didn't even notice. A few did, though, and posted about it on the official forums, prompting Ghostcrawler to confirm that the change was intended. Blink still isn't perfect, but it fails far less often, raising the life expectancy for mages everywhere by several seconds.

Patch 3.3 is the greatest thing ever

Frost mages got a permanent Water Elemental...Deep freeze got fixed...the Lich King opened up his winter wonderland to the public...and dungeons got decidedly more random, except for all the times when I get the stupid Oculus six times in a row because people keep dropping group from there.

So where does all this change leave us? The answer, my friends, is yes.

Every week Arcane Brilliance teleports you inside the wonderful world of mages and then hurls a Fireball in your face. Check out our recent mage primer for patch 3.3, or our lengthy series of mage leveling guides. Until next week, keep the Mage-train a-rollin'.