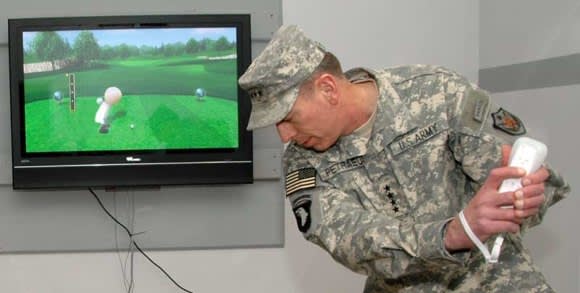 The Department of Defense is launching the Nintendo Wii as a weapon against head injuries, according to the Huffington Post. At Fort Campbell's newly opened brain injury center, soldiers are being put through a "battery of tests" to measure different cognitive functions before and after deployment -- specifically in cases of potential traumatic brain injury (TBI).

The tests include a driving simulator to measure reaction to environment change, visual testing to determine accuracy and speed and coordination tests using the Nintendo Wii. Once a soldier's individual deficiencies are discovered, a therapy program is designed to "help retrain the brain" in those specific areas. Since opening in September, Fort Campbell's brain injury center has screened about 400 soldiers for TBI and is currently treating about 60 cases.

[Via Fidgit. Image credit: SignOnSanDiego.com]
In this article: brain-injury, department-of-defense, head-injury, health, medical, soldiers, testing
All products recommended by Engadget are selected by our editorial team, independent of our parent company. Some of our stories include affiliate links. If you buy something through one of these links, we may earn an affiliate commission.
Share
Tweet
Share