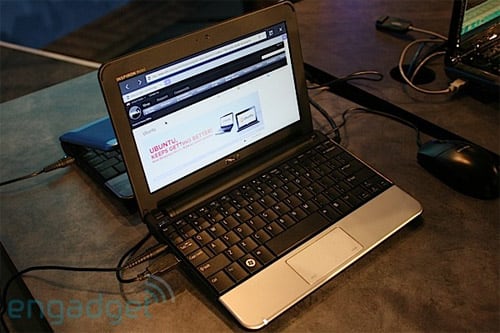 Dell's "highly experimental" Mini 10v with Ubuntu Moblin Remix may not be ready for the mainstream just yet (though it is on sale to everyone who dares), but it's more than ready for the enthusiasts over at ArsTechnica. After purchasing a $299 base unit, they proceeded to take a closer look at just how Moblin fared on a netbook -- probably because the actual hardware specifications are the same as always. Reviewers noted that the UI they were graced with looked an awful lot like the shell they saw back in May, though this build was decidedly more stable and "complete." That said, they still managed to uncover a few bugs, and they were indeed saddened to find that the integrated web browser was downright "weak." All told, critics were impressed with the progress on Moblin, but they still proclaimed that it has a long ways to go before it'll be "ready for regular users." If you've been thinking about exiting your comfort zone and picking one of these up, you owe it to yourself to give that read link a tap.
In this article: Canonical, dell, dell mini 10v, DellMini10v, intel, mini 10, mini 10v, Mini10, Mini10v, moblin, moblin remix, MoblinRemix, netbook, operating system, OperatingSystem, os, reviewed, ubuntu, ubuntu moblin remix, ubuntu remix, UbuntuMoblinRemix, UbuntuRemix
All products recommended by Engadget are selected by our editorial team, independent of our parent company. Some of our stories include affiliate links. If you buy something through one of these links, we may earn an affiliate commission.
Share
Tweet
Share