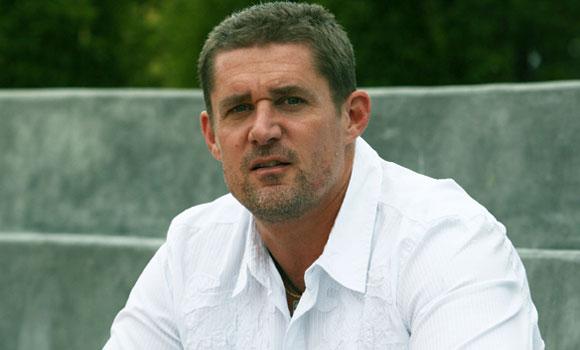 We don't have to tell you who Glen Schofield is. The guy's been cementing his name in the industry for years now, and considering his recent realignment from EA's banner to Activision's, starting a new studio in Sledgehammer Games, we all have a lot of questions. Let's get to it:

You were one of the individuals most responsible for bringing Dead Space to fruition -- one of Joystiq's best games of 2008. How difficult an endeavor was conceptualizing that game, and how willing -- in the way of providing resources -- was EA to create the game?

Dead Space was an idea I wanted to pursue for quite a few years while at EA. I brought the idea to the previous president when I believed the window was right for the game to fit within EA's portfolio. At the time, EA was largely leveraging licensed IPs, and getting support for a new IP concept was tough. I really appreciated the opportunity he gave us. Fortunately, we had a passionate team of developers who poured a ton of energy into converting our skeptics into believers. In the end, the critical response by fans and the press is something myself and the entire team are very proud of.

Visceral Games (formerly EA Redwood Shores) is still an EA studio, currently wrapping up Dante's Inferno. When you began Dead Space, Game Informer #174 -- the official unveiling -- called you guys a "renegade team." Who was on that team, and how did you earn that "renegade" status?


I was given the opportunity to hand pick and assemble a small, triple-A caliber starting team to launch the pre-production effort.

We were considered "renegade" by taking risks in how we approached designing and building the game, as well as aggressively going into a new genre for EA. Additionally, we set out with a very specific goal -- to take the Survival Horror crown from Resident Evil (one of our all time favorite franchises) -- and we broke a lot of rules along the way to try and make that happen.

Recently, you left EA (along with Dead Space director and Visceral COO Michael Condrey) to form Sledgehammer Games under EA's biggest competitor, Activision. You left behind a position in which you presumably had a lot of control and a leading brand, that you helped establish, in Visceral Games. What prompted your departure? How is the transition going?

The transition has been fantastic. We haven't looked back once. I had a great time at EA, we made some excellent games, and I'm proud of the work we accomplished there. Activision offered us the opportunity to start a studio from scratch, create the culture, hire the team and build a state of the art game making facility. Instead of inheriting an existing studio like I did with Visceral, we were now able to create a brand new space, and more importantly, a new culture. It is definitely exciting to walk into a new studio, with brand new gear, that we designed and outfitted to be an environment that allows people to do their best work. In addition, we were able to set the values of the team and the studio in a way that wasn't possible at Visceral.

Further, I'm extremely excited to be back into a more hands-on role in the development of a game. At Sledgehammer I have the chance to act as both GM and the product EP. It was something I just couldn't turn down. Additionally, operating Sledgehammer under Activision's independent studio model feels great. They have given us full support to build a world class studio and implement the development methodologies we believe will lead us to success. They leave game-making to the game makers. It's a simple philosophical difference with some other companies' approaches. It's empowering and doesn't force processes into teams that slow down decision making.

In the press release announcing Sledgehammer Games, you described the new studio as "a world-class team made up of developers with a proven track record in delivering top-rated games." What makes this studio so special? What separates it from the other teams you've worked with in the past?

I know that's a big statement to make but after two decades in the business you develop a broad and deep network of really tremendous game makers. We've worked with hundreds of developers over the years, and strong relationships develop with the top performers. We knew that we could assemble a team of the best of the best.

I will admit, it was a little scary leaving EA. On day one, Sledgehammer Games was just two of us and a laptop at Starbucks. Within days, we had literally 1800 resumes of people from all over the industry, many whom had followed us from past studios, and many who had gone off to other opportunities in the past and were interested in being part of this opportunity. We have a huge recruitment effort underway and are still actively looking for top talent.

Activision has always placed an emphasis on annual installments of its key IPs. Is this something the company is encouraging Sledgehammer Games to do? How much independence from Activision's oversight does Sledgehammer enjoy?

The annual installment criticism is commonly voiced of both EA and Activision. In fairness, most Fortune 1000 companies are built around a predictable revenue model, and Activision is no different. Developing and publishing games is expensive, and funding those efforts means having a profitable business model. Annual installments are a necessary component of that model, but definitely not the entire mode. Sledgehammer has been given the time to develop a game that will make the company proud. They hired us for our track record and vision and they are supporting our plans, ideas and creativity 110 percent. It's refreshing; the trust that they have given to us, and we don't take it lightly.

On the topic of franchise IPs, EA hasn't given up on the Dead Space brand -- there's the Wii game that has been met with lackluster sales and now the revelation of a full-on sequel in Dead Space 2. Did you have your thumbs in any of those pies before leaving EA?

Yes, I was the GM on Extraction and one of the people responsible for the concept. Although my name was reduced to "Special Thanks" after I left Visceral, I worked closely with the EP and team until the game was at BETA.

We had a lot of discussions about Dead Space 2 as we were finalizing the original game, but the sequel officially began under the care of a new EP, as I turned my focus toward the other Visceral titles in production. It was difficult for me to let go of creative control of the franchise, but I wanted to empower the EP at that time to deliver his vision. I obviously had some early input into it, but the title has been in production for awhile now. I read online that DS2 has yet again switched EPs as well, so I am sure a lot has changed since I left.

Dead Space also had a comic tie-in and even an animated feature. Has there been talk about a full Hollywood film? Has there been any interest there? What other ways of extending the franchise and building up its universe have been discussed?

While I was the Executive Producer we had a six-comic book series, an animated feature, a "Sci vs Fi Show" on the Sci-Fi Network, and three action figures created. I read recently that they are pursuing a Hollywood film adaptation. I look forward to seeing if anything comes of that.

What are your feelings on auteurship in game development? Obviously, you've exercised a kind of "proud papa" role with the Dead Space franchise, but what camp do you find yourself in as far as artist recognition vs team recognition vs publisher recognition?

We firmly believe that making a fantastic game is a team effort. Sledgehammer is built around the core belief that everyone is a game maker, and great ideas can come from anywhere. That extends from every developer in the studio, to our valued partners across the publishing organization. What matters to us is that we make the best game we can, not who gets credit for the idea. It's a team effort, and we all ride the wave of success together.

Anyone who knows me well knows that I have particular characteristics of the films, games, and art that I am drawn to. I have a pretty broad range of personal work, but the game we are making at Sledgehammer will definitely have a certain feel that people have come to expect from the pedigree of this team.

What's in the cards for you and Sledgehammer? Obviously, you can't say much about your upcoming game, but can you confirm that it's not Activision's Bond game or any of the other possibilities recently hinted? There seems to be some speculation that the game was something Activision had on its plate before forming Sledgehammer -- is your new game something unique you've come up with, or did Activision have a mind to put you to work on something pre-planned when you started Sledgehammer?

Nice try! While I'd love to tell you more, I can't give you any details yet -- except that it will be in the action genre, and that we committed to delivering something that surpasses our previous titles in terms of critical and commercial success. We believe the game will be quite unique and will bring something new and exciting to our fans.
In this article: activision, DS, ea, Electronic-Arts, glen-schofield, interview, Microsoft, Nintendo, sledgehammer, sledgehammer-games, visceral, visceral-games, Wii, Xbox-360
All products recommended by Engadget are selected by our editorial team, independent of our parent company. Some of our stories include affiliate links. If you buy something through one of these links, we may earn an affiliate commission.
Share
Tweet
Share