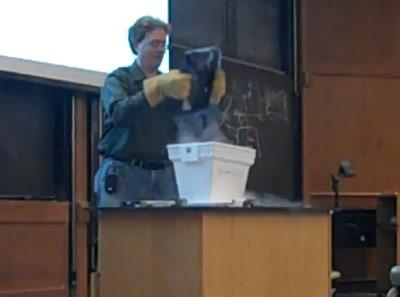 Hey, students -- pay attention. Not to us, mind you, but to the syllabus provided by your professor. Kieran Mullen, a physics professor at the University of Oklahoma, has a fairly strict rule about gadgets in class: there won't be any, ever, under any circumstances. Balk all you want (understandable given his own clipped-on cellie), but if you sign up for this guy's class, you'll be flipping your phone to "off" and leaving your laptop in the dormitory. And if you try to blaze your own path and slip that netbook into the back row, you might leave bitterly disappointed. As you'll see clearly in the video past the break, Mr. Mullen sought to make a visual point that laptops weren't allowed in class (he calls them "a distraction"), and while it seems that the whole stunt was premeditated, most students acknowledged that his point was driven home. In short, he took a defunct machine, submerged it in liquid nitrogen, and proceeded to make the following statement:

"This is just liquid nitrogen, so it alone won't hurt the computer. But this will."

Find out exactly what "this" was by hitting that 'Read More' button there on the lower left.

See more video at our hub!
In this article: break, breaking, broken, comedy, education, funny, laptop, liquid nitrogen, LiquidNitrogen, oklahoma, oklahoma sooners, OklahomaSooners, OU, prank, professor, school, smash, smashing, stunt, university, university of oklahoma, UniversityOfOklahoma
All products recommended by Engadget are selected by our editorial team, independent of our parent company. Some of our stories include affiliate links. If you buy something through one of these links, we may earn an affiliate commission.
Share
Tweet
Share