J. Stern
February 25th, 2010
In this article: 210, Broadcom, broadcom crystal hd, broadcom crystal hd video accelerator, BroadcomCrystalHd, BroadcomCrystalHdVideoAccelerator, crystal hd, crystal hd accelerator, CrystalHd, CrystalHdAccelerator, hp, HP Mini, HP Mini 210, Hp mini 210 HD, hp mini 210 hd edition, HpMini, HpMini210, HpMini210Hd, HpMini210HdEdition, laptop, laptops, Mini 210, Mini 210 HD, Mini210, Mini210Hd, NetBook, NetBooks, review
Netbooks for all! We're convinced that's the motivational saying plastered to the wall in the HP lab where the company births Minis for everyone but your pet fish. But of all the company's Pine Trail offerings, we're most excited about the $425 Mini 210, which has a 10.1-inch HD screen and a Broadcom Crystal Accelerator chip that promises decent HD video playback, even with Flash. With an attractive new thin design, improved chiclet keyboard and that promise to handle high-def content, the Mini 210 has the potential to kick the others to the curb. Given the issues we had with the Broadcom-powered Dell Mini 10 and HP's newer touchpads, though, we had to put on the glasses and take a closer look. Join us past the break for the full review, will you? %Gallery-86317%
HP 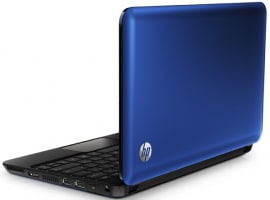 Of all the netbooks we've reviewed in the last few months we may just be the most impressed with the HP Mini 210's look. We know that's a bold statement, but we like the understated design and how the top and bottom of the system are covered in the same smooth, yet not-too-glossy plastic. HP's also made it easy to swap the RAM and hard drive: two latches behind the back of the battery let you detach the entire back lid to get to the goods. The subtle imprinted X pattern on our unit's "silver crystal" lid wasn't exactly our thing, but we're big fans of the solid red, blue and black color options. Either way the fact that the lids don't collect fingerprints makes us want to throw a party with spiked punch.

The three-pound system not only feels solid, but its inch-thin body is quite slender. The three-cell battery option fits flush with the system, but the six-cell battery adds an extra half an inch in the back. Unlike previous HP Minis, the Mini 210 has all the necessary netbook ports, including three USBs, VGA, Ethernet, SD card and a headphone jack.

Since the early days of the Mini 2133 HP has used a flush matte keyboard on its netbooks, but the Mini 210 changes things up with a chiclet keyboard. Our fingers didn't want to part with the soft touch of the black matte keys, and the make of the entire panel feels firmer than that on the ASUS Eee PCs or even the Toshiba Mini NB305.

Unfortunately we don't have the same positivity when it comes to the Mini 210's touchpad. We're happy that HP finally got rid of the vertical mouse buttons, we just wish they hadn't integrated them into the entire pad itself. The ClickPad, as HP calls it, is similar to the one we saw on the HP Envys, and though the software has been updated it's still hair-pulling frustrating at times. Because the pad has integrated buttons and supports multitouch gestures, the ClickPad has a hard time distinguishing between finger placement on the buttons and on the pad itself. The result is a lot of mistaken zooming when you just want to drag something across the screen. We get that HP has been trying to trying to emulate Apple's touchpads, but the software and two button combo just hasn't been working for them. This isn't to say it isn't usable – we ended up just tapping to make selections -- but that doesn't mean we think this is forgivable. And the fact that HP included a $24 matching mouse with our review unit tells us it's likely aware of the problem.

The Mini 210's 10.1-inch screen's flush bezel makes the 1366 x 768 resolution display look higher class than most other netbooks, but while colors look bright and the extra pixels make 720p content look crisp, the glossy coating is extremely reflective. Vertical viewing angles good enough when the screen was tilted back, but horizontal viewing angles were quite horrendous. Sharing this screen with a friend while laying in bed required a fair amount of moving on our part.

The Mini 210 relies on the now typical 1.66GHz Intel Atom N450 CPU and 1GB of RAM combo for its power, and it handled our typical netbook tasks – writing this review in Word 2007, surfing in Chrome and listening to Pandora – without a hitch. We did notice, however, that the left hand size of the system heated up during our regular usage of the netbook. It wasn't enough to make us put the netbook down, but our jeans definitely stayed toasty. Our unit came with a smaller 5,400rpm 160GB hard drive than most netbooks, though you can upgrade it to a faster 250GB 7,200rpm drive for 30 bucks on HP's site.


The HP Mini 210, like the Dell Mini 10 (here's an idea: everyone name their netbooks the same thing!) can be configured with a $35 Broadcom's BCM70012 Crystal HD accelerator -- it's a slightly older model than the Dell's BCM70015. Released just yesterday, Flash 10.1 Beta 3 was optimized to support the Broadcom card, and the Mini 210 definitely reaps some of the benefits of it, but that's only after you download it from Adobe's site and then update the Broadcom drivers. When that was all said and done, the Mini 210 didn't have any issues playing back a 720p Avatar trailer on YouTube, but unlike the Dell Mini 10 it had issues going up to the 1080p setting. The video proof is below, but according to Broadcom the issues have to do with Flash 10.1 Beta 3's compatibility with the older version of the card. Though that's a bummer, we assume most will be content with the 720p playback considering the screen resolution and the Pineview chipset's lack of HDMI support. We should also note that Flash videos played much better in Google Chrome -- we got a few "Not Responding" errors in Firefox.


As we learned with the Dell Mini 10, playing local HD content is highly dependent on software. A downloaded 1080p Iron Man 2 trailer played back without pauses in the preloaded ArcSoft TotalMedia Theatre software, but playback of that same video was choppier in Windows Media Player 11 and VLC Player. There's no doubt in our minds that the HD playback experience on the Mini 210 is miles ahead of that of a Pine Trail netbook without Broadcom inside and that counts for something. However, we have to say that it isn't as seamless as it need to be for the end user and the solution continues to have more restrictions than NVIDIA Ion-based netbooks.

The good news is that if you do manage to get some HD videos to play, the HP Mini 210's six-cell battery will let you watch about two movies without having to dig around for an outlet. When looping the same HD video the Mini 210 lasted for four hours and 45 minutes, and a longer five hours and 15 minutes when tested with a standard-def video. That's not as long as other netbooks we've tested, but when we used the netbook to write this masterful review and listen to some tunes we got close to seven hours of runtime. Given that the three-cell battery got a disappointing 2 and 15 minutes of juice on our video loop test, going with the six-cell seems like a no brainer.

Despite our hesitations about instant-on OSes, HP has done a nice job with its HP QuickWeb -- we like the three panels one of which can pull in e-mail. HP's also preloaded the netbook with its MediaStream software that streams media from one PC to the netbook, and its CloudDrive that provides 2GB of storage to allow for easily transferring files to the mini-laptop. On the other hand, the HP Support Assistant software couldn't be any more annoying with constant pop-ups. No, we do not need your help!

As a regular netbook (sans all the HD stuff) the Mini 210 goes for about $349 with a six-cell battery. Though its ClickPad is frustrating, as a basic netbook it's a decent option given its attractive design, comfortable keyboard and seven hours of battery life. But what about the $425 HD model? As we concluded with the Dell Mini 10, spending the extra money for the Broadcom is pretty hit or miss at the moment. Yes, Flash 10.1 Beta 3 allows for better Flash and Flash HD playback, but right now it's flaky at best. Whether that's worth the extra cash is up to you, but if you're looking for a netbook that can undoubtedly stream HD Flash content out of the box you're best looking at an NVIDIA Ion-powered system like the HP Mini 311, or better yet waiting for an Ion 2 system that uses NVIDIA's new Optimus technology and promises better battery life than the first generation.
All products recommended by Engadget are selected by our editorial team, independent of our parent company. Some of our stories include affiliate links. If you buy something through one of these links, we may earn an affiliate commission.