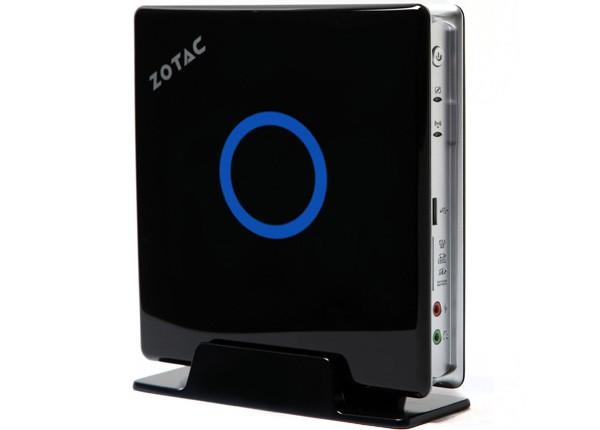 Like gaming? Move right along to the iBuyPower booth, please. Want an unobtrusive PC that will feed your Hulu and YouTube HD streaming addiction? Say hello to the ZBOX HD-ID11. It's basically a desktop version of the same Ion 2 setups you saw announced on the mobile front yesterday, and as such should provide flawless Flash 10.1 playback while occupying an extremely lean footprint on your desktop. Zotac has matched MSI's Wind Box DE220 with its inclusion of a dual-core 1.66GHz Atom D510 CPU, though it obviously differs with its NVIDIA Ion 2 graphics subsystem that includes 512MB of dedicated DDR3 memory. HDMI 1.3a and standard VESA wall-mounting are expected extras, with six USB ports, integrated 802.11n WiFi, dual-link DVI, and a 6-in-1 media card reader covering the rest of your bases. Check out some 1080p playback on a similarly specced system right here while you wait for pricing and availability to be revealed.

Update: We've heard directly from Zotac on the matter of pricing and we're told that the American MSRP will be $209.99 ($239) for the barebones edition, which will require you to add your own hard drive, memory and OS.

Update 2: Zotac seem to have been a little too ambitious with the initial price they quoted and have asked us to correct that number upwards by 30 bucks -- MSRP is now expected to land at $239.
In this article: 1080p, atom, atom d510, AtomD510, desktop, hd, hd-id11, htpc, intel atom, intel atom d510, IntelAtom, IntelAtomD510, ion 2, Ion2, media pc, MediaPc, mini pc, MiniPc, nettop, next generation ion, NextGenerationIon, nvidia, nvidia ion, nvidia ion 2, NvidiaIon, NvidiaIon2, pineview, zbox, zbox hd-id11, ZboxHd-id11, zotac, zotac zbox, ZotacZbox
All products recommended by Engadget are selected by our editorial team, independent of our parent company. Some of our stories include affiliate links. If you buy something through one of these links, we may earn an affiliate commission.
Share
Tweet
Share