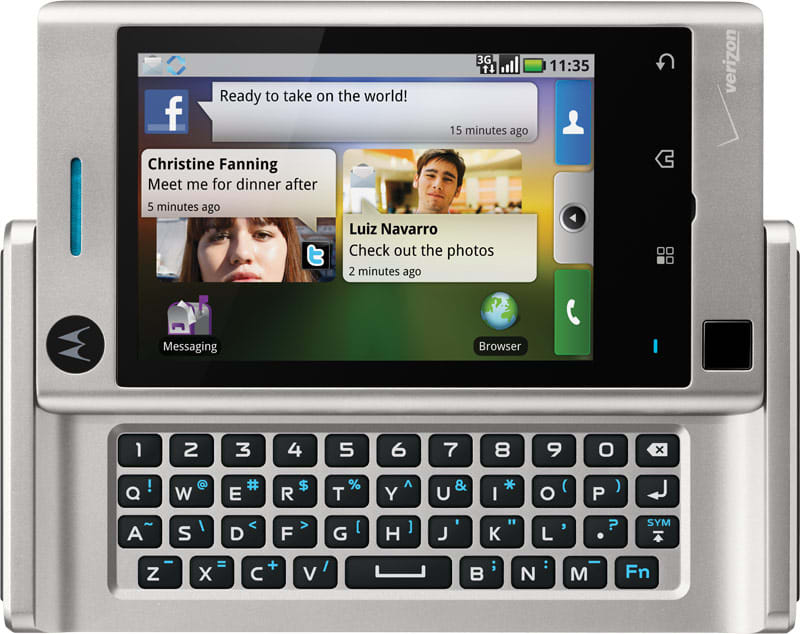 While Motorola's vanilla-Android Droid has become the most recognizable Android device on the market -- thanks in part to a bombastic ad campaign -- Motorola's primary focus has been on its own custom Blur UI. At least, if quantity of devices are any indication. Hitting Verizon just as the Blur-powered Backflip heads to AT&T, the new Motorola Devour is an odd cross section of the "consumery" Backflip and Cliq, and the high-end Droid slider. We've been playing with the phone for a week or so (you can find our initial hands-on, video walkthrough and unboxing here), so follow us after the break as we walk through the triumphs and tragedy that is this device.

How would you rate the DEVOUR?
We want to hear what you think. Post a quick review now to join the conversation!
Write a review

At first glance we'd call the Devour "frumpy" in looks. It surrounds a smallish 3.1-inch 480 x 320 LCD with a decent amount of black bezel, and then encases that in some overwrought aluminum. Upon closer examination, there is still plenty of wasted space, but once in hand you can at least tell that all the bulk goes into crafting an extremely robust and well-machined device. The slider has a delightful pop and snap that's thoroughly lacking from the Droid, the entire assembly of extruded aluminum doesn't have an ounce of budge or bend to it, and the rubber bumpers on the top, bottom and sides just contribute to the feeling of robustness. If it weren't for the presumably fragile screen, we'd have no problems dropping the phone onto all sorts of concrete.

The hardware buttons are pretty minimal on the exterior, with a slightly-too-recessed unlock / power button on top, a volume rocker and voice command-activator on the right side, and a camera button below them. On the face is an optical track pad which clicks, next to capacitive buttons for menu, home and back. The row is thankfully offset from the bottom of the LCD, avoiding the fiasco of the Nexus One's easily actuated row, but you can't help but think the black expanse in between is wasted somehow. The optical trackpad is very nice and sensitive for what it is, but we hardly use it; we've yet to see an Android device that makes a compelling use case for a trackpad, D-pad or scrollball outside of the occasional textual revision. A very minimal blinking indicator light is to the left of the primary buttons on the face, trying to tell us something, though we haven't quite ascertained what yet.

There's a rather dramatic recessed headphone jack centered at the top of the device, which isn't as discriminatory in sleeve as the original iPhone, but still restricts the fattest of our 3.5mm plugs. We'd be more miffed if Android didn't make such a poor music player as to make the jack fairly pointless in use with any premium headphones. There's a relatively large speakerphone grill at the bottom of the phone, which pumps out clear if not overly loud (by Verizon's standards) audio.

At the end of the day, the phone is probably too fat and bulky to be winsome to its presumed Sidekick-familiar audience looking to graduate to a sexier device. The side loading battery is probably one of our favorite bits of the build, at last rectifying the age-old battery pop-out we used to when dropping our phones, and providing a way to get at the 8GB bundled microSD card without turning off the phone, but at the same time the unique assembly probably contributes the most to the phone's girth. Sure, the handset is really just barely thicker than the Droid, but it lacks the speedy processor or incredible screen of its big brother that might make such heft excusable.

The slide-out keyboard is another in a long line of missed opportunities from Motorola. For a company so bent on putting keyboards into its Android phones, you'd think it would be a bit more serious about being good at it. Granted, the keyboard is vastly superior to the Droid's mushy mess, with fairly well-separated keys and no D-pad to push them off center. Unfortunately, the keys feel just a little too flat to be truly great, almost like an quasi-separated membrane keyboard than an actual collection of separate keys. The other problem is that Motorola has given the numbers their own dedicated row, pushing the spacebar up in between V and B... making the keyboard extremely frustrating to learn, or to switch between this and other devices. For a regular user this probably will cease to be a problem eventually, and we could see someone getting theoretically very good at this 'board, but it's still no excuse for such a frustrating layout.

The capacitive touchscreen is nicely responsive and certainly decent in pushing pixels, but it simply pales in comparison to the jumbo-sized high resolution screens we're starting to see on other devices, and its colors seem slightly washed out, though it does offer up some pretty strong blacks for an LCD.

So, another foray into Blur, and this time with a faster processor (a Qualcomm MSM7627, the same chip used to power Palm's Pixi). To be honest, Blur isn't much of anything to get up in arms over. It occupies the home screen (though its widgets can easily be moved or removed) and attempts to merge a few forms of messaging, but it has neither a far reach, nor annoying habits that might hurt the rest of the Android experience.

Of course, that's a pretty weak compliment. In reality, we just find Blur to be mostly useless due to what we'll term the "do you really care about them?" factor. Basically, while we love everyone we've ever friended on Facebook or followed on Twitter, there are simply too many people to make the home screen ever relevant. The top widget displays our latest status update (mildly helpful), but the Twitter and Facebook widgets show the face and text of the most recent update or DM by our fourth grade swim coach or our mom's old quilting circle buddy -- sure, they're fine folks, but we really wish they weren't occupying a third of our home screen at the moment. If you tap into Twitter or Facebook you get a linear, one-at-a-time view of friend updates that you can swipe horizontally to browse through before you quickly lose stamina. There is an inbox-style view for DMs that's slightly more helpful, and the "people" button at the bottom right provides the true, "core" integration of status updates and contacts available on the device in an actually usable list view, but we'd give all of Blur up in an instant for good individual Facebook and Twitter apps. We're not saying this sort of integration can't be done well, but Blur sure isn't the answer.

Luckily, some of the performance woes that typically have dogged Blur haven't been so evident here. We're not sure if that's due to recent updates Motorola has made to the software, or thanks to the peppier new processor, but we often found swiping between home screens or even occasionally jumping in and out of apps to be a tad more responsive on the Devour than the Droid. Unfortunately, the real legacy of Blur isn't its failure to be useful, but the fact that it's going to delay this phone from getting real and useful updates of Android as a whole -- it's perfectly designed for fragmentation, and if you find yourself unhappy with the initial experience, you're going to be extra-frustrated by the unpredictable and snail-paced update schedule.

We're still pretty happy with many elements of Android floating around here, like that best-in-class email experience, vibrant developer community and useful widget UI, but there's nothing about Blur or the Devour that really make them better. The browser is of course decent, but without multitouch or a "superphone" processor to make it scream, it's hardly a selling point. It does pack Flash Lite, but without support for Hulu or YouTube for Viddler, it's kind of moot.

We'd love to have that ever-lovable Verizon network to fall back on, but while we haven't done any super-in-depth testing, we'd say reception for both data and voice has been generally worse on this phone than the Droid. We dropped a couple of calls in our radio-wave-defying apartment and drops to 1x from 3G on occasion when browsing. It's not bad, but it's much more comparable to AT&T than our regular Verizon experience. Again, nothing scientific, but we're curious if the aluminum enclosure has something to do with our difficulties -- if you'll remember, the original iPhone has a plastic end to help with reception. While the Devour has rubber endcaps, they don't cover either end in all directions, which could explain some of the sporadic coverage we've experienced from a single spot.

You might've noticed that we haven't mentioned the three megapixel camera just yet. It's hardly worth mentioning, producing dark, grainy pictures in just about any lighting condition. There's no flash, and it's fixed focus. At least Android is kind enough to make video a standard feature on a low-end device like this, but there's nothing spectacular about the quality in that mode either.

Battery was completely (and thankfully) on pace with the better-case-scenario smartphones these days, lasting for days on standby, and easily making it through a regular day of use -- as long as you've got a charger by your nightstand, it shouldn't be much problem, and we almost made it through two days of real use.

Eventually, we just have to ask ourselves "why?" We see why Motorola might think it needs a premium-styled slider to present its precious Blur to a crowd that might otherwise be thinking Droid, but we'd exhort that crowd: just go with your first impulse. There's really nothing to this phone outside its keyboard and a slightly superior build quality (at expense of aesthetic) that commends it over the Droid. Given the fact that both devices are going for the same price at Best Buy right now ($99 a pop), we'd say the answer is pretty simple.

In this article: android, blur, devour, motoblur, motorola, motorola devour, MotorolaDevour, review, verizon, verizon wireless, VerizonWireless
All products recommended by Engadget are selected by our editorial team, independent of our parent company. Some of our stories include affiliate links. If you buy something through one of these links, we may earn an affiliate commission.
Share
Tweet
Share