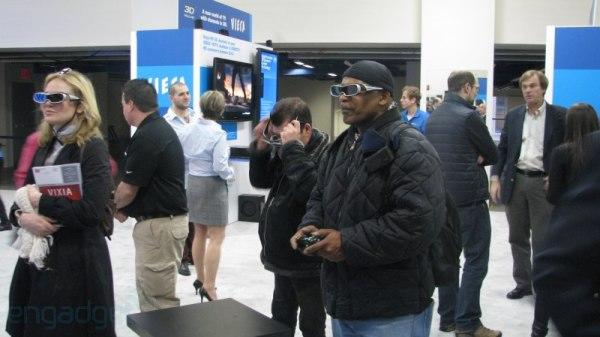 Panasonic has never needed to wait for a new studio album before putting together another major tour, the latest of which it's dubbed Touch the Future. Trading in the traveling truck exhibition for a more intimate indoor setting, the real production Full HD 3D televisions are available and on display, along with glasses, Blu-ray players plus a few other products for good measure. We took a look as soon as the doors opened in NYC (the display runs through today at the Penn Plaza Pavilion and other locations in Chicago and Los Angeles, check the schedule for 12 more cities on deck) and got an eye full of the same 50-inch plasma 3DTVs on sale at Best Buy stores around the country. One major new look for this demo was an NVIDIA PC running the 3DTV Play solution, as you can see from the pics even New York's finest enjoyed turning a lap or two of Need for Speed: Shift in 3D. The action was smooth and easy compatibility with 3D gaming on the PC should provide plenty of content while we wait for more true 3D games to hit consoles (which should ramp up after the PS3 update this summer) while checking out Blu-ray demos on a 50-inch television proved every bit as engaging this time as it did on the 152-inch CES display.

Without the crowds of CES or CEDIA we got a longer look at the new displays than before and could appreciate the clarity and sharp picture produced by the improved refresh rate, although the bright lights of the demo room didn't make for the best environment to evaluate image quality. The glasses and everything else were the same as we'd seen before, but we could move around at wider viewing angles and get a clear picture from any reasonable seating position, with one caveat. As the IR sync is integrated in the frame, if someone else sits (and stays, simply walking by didn't cause any problems) between the viewer and the specific segment blasting its signal, the glasses can lose their wireless connection. Unless your living room has an obstructed viewing section it shouldn't be a problem but it's something to think about before moving the furniture around.

Speaking to several of the executives on hand little information was available on what's next, other than to expect larger sizes like the 54-inch version within the month, followed by 58- and 65-inch plasmas throughout the spring and into the summer. Those active shutter glasses should squeeze about 250 hours out of the included watch battery, but we couldn't get an answer to whether they would work on competitors hardware, leaving that as one thing we're still waiting to try out for ourselves. 3D is still waiting for its first killer live event to move buying interest among anyone other than the earliest of adopters, but this exhibit lives up to its name, with DirecTV 3D broadcasts, games and movies just bleeding into the "available" category it's about time you went from reading about 3D at home to experiencing it firsthand.
In this article: 3d, 3dtv, blu-ray, hands-on, nvidia, panasonic, plasma, TC-P50VT20, TC-P50VT25
All products recommended by Engadget are selected by our editorial team, independent of our parent company. Some of our stories include affiliate links. If you buy something through one of these links, we may earn an affiliate commission.
Share
Tweet
Share