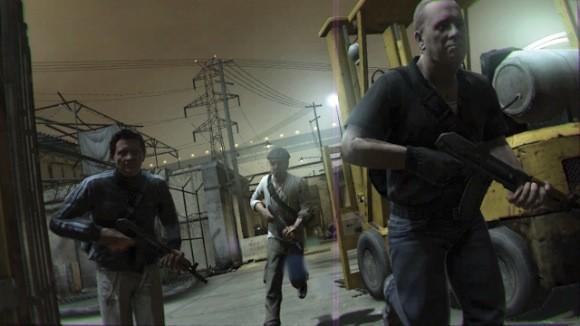 Whether or not it's Inspired by real-life heists -- that's according to its developer, IO Interactive -- the Fragile Alliance multiplayer mode in Kane & Lynch 2: Dog Days definitely feels inspired. I recently played a few rounds of its increasingly difficult, single-player Arcade game type (shown in the above video) before working together with (and against) fellow journos online and came away pretty impressed. In fact, it seemed more fun and polished than what Joystiq's played so far of the game's single-player campaign.

Here's the setup: Players start out on the same team -- the crooks -- and steal loot at the beginning of a round. Those who can make it past A.I. controlled cops in one piece (and get inside the getaway vehicle before it leaves) share a cut of the cash everyone's grabbed. But these aren't the most honest men you're playing as, so it's possible to turn traitor on your own gang -- even take other players as human shields -- and attempt to avoid death at their (and the cops') hands, in hopes of taking all the spoils for your own. For the first match or two I played, everyone worked together. After that, people started getting greedy.

The particular heist I played had the crooks lying in wait for another group of thieves to rob a building before gunning them down and grabbing the cash. It was definitely a unique start to a match, standing on a balcony and taking out the A.I. criminals below, then charging down a flight of stairs to pick up the loot. (Doing so is a lot like capturing a control point -- you need to stand by the money for a certain amount of time before it's yours.)

After that, it was a bloody, brutal fight against the police as we attempted to make it down an alley, across a street and then hop into the getaway van. There were plenty of opportunities to take cover, use fire extinguishers as explosives and rack up more cash by taking out the fuzz. All the while, there was a counter ticking down to the arrival of the getaway driver; if none of the players could reach him, the round was a bust.

Following the thrilling alleyway shootout, I managed to make it to the van. I climbed inside and had the option to make the driver wait a little longer for my fellow lawbreakers, or agree to split my haul with him 50/50 in exchange for leaving them behind. In doing so, I'd get everyone's dough, but would also all but guarantee I'd be taken out by my own guys as soon as the next round started.

I didn't risk it, but, as it turned out, I was mowed down by one of my own in the next round. He obviously wanted my cash and was willing to risk the others turning on him, which some did. I got my chance at revenge, though, as I reincarnated as one of the police officers trying to stop my former crew's escape. I could still see the names of the other players and how much money they were carrying, but the guy who shot me had a special label, indicating I'd earn a bonus for getting payback on him.

The whole thing was fast-paced and felt really well thought out. We continued playing round after round, while the cops were growing in number and intelligence, using better tactics and even releasing police dogs to hunt us down. Combined with the ever-present possibility of a traitor from within stabbing me in the back, it was really tense. My group eventually failed three rounds and the match ended.

Fragile Alliance sounds good in concept and was great in execution, down to the ability to purchase new primary and secondary weapons between rounds using the cash I'd amassed. The real test will be if all of the maps end up as good as the one I played on (I also got a look at one that takes place on a subway platform) and if enough players can get into the spirit of the mode. I'll say one thing: Unlike a lot of multiplayer games, it's nice to play one where you can get back at team-killing jerks without being penalized. Heck, you're actually rewarded.
In this article: eidos, fragile-alliance, io-interactive, kane-and-lynch, kane-and-lynch-2, kane-and-lynch-2-dog-days, Microsoft, multiplayer, Square-Enix, Xbox-360
All products recommended by Engadget are selected by our editorial team, independent of our parent company. Some of our stories include affiliate links. If you buy something through one of these links, we may earn an affiliate commission.
Share
Tweet
Share