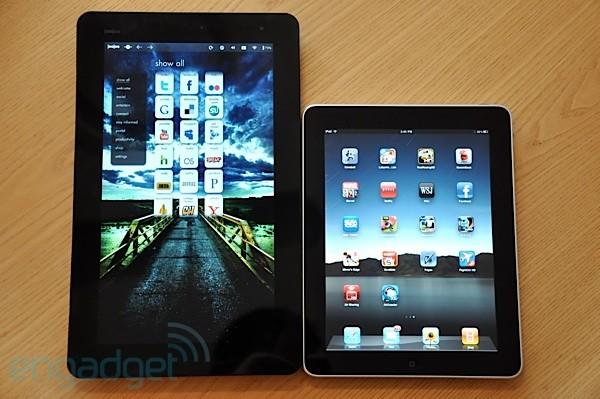 Fusion Garage CEO and JooJoo creator Chandra Rathakrishnan has certainly discussed the iPad before in talking up his own tablet, but nothing could have quite prepared us for the bit of bombast he unleashed on the occasion of the iPad's international launch. While he started out with the usual line that the "JooJoo delivers the entire Internet -- including Flash-based websites," he soon took things to a whole new level, saying that "we don't see the need for an app store," because "an app store sells stripped down versions of actual websites" -- stripped down websites like Brushes, KORG iElectribe, and Real Racing HD, we suppose. Believe it or not, however, Rathakrishnan didn't let things sit there, and apparently went on to describe the iPad as just "another storage device with web capabilities." Of course, there's at least a chance Chandra was actually paying the iPad a compliment, since a "storage device with web capabilities" would be a pretty big step up from the JooJoo.
In this article: app store, apple, apple ipad, AppleIpad, apps, AppStore, Chandra Rathakrishnan, ChandraRathakrishnan, fusion garage, FusionGarage, ipad, joojoo, rant, Rathakrishnan, tablet
All products recommended by Engadget are selected by our editorial team, independent of our parent company. Some of our stories include affiliate links. If you buy something through one of these links, we may earn an affiliate commission.
Share
Tweet
Share