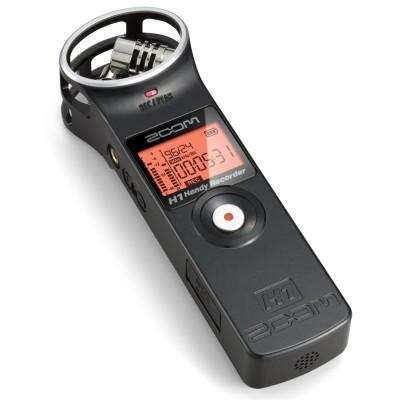 Samson's attempt to break into the Flip-dominated portable video space didn't hit all the right notes, so the company's gone back to basics with a new handheld audio recorder -- as delightfully basic as it could go. The Zoom H1 doesn't have fancy 4-channel recording schemes or a triple-capsule mic; it's merely a twin X/Y stereo recorder that does 24-bit / 96-kHz audio at an unheard-of $99 price. With a reported 10 hours of battery life on a single AA cell, up to 32GB of removable microSDHC storage and loads of physical controls, it already feels like an obvious choice for students, journalists and the like, but of course all that's just on paper -- we'll be waiting till its July 30th debut to hear if the unit performs as positively in real life. PR after the break.
Show full PR text

The H1 puts professional stereo recording capabilities in your pocket

Hauppauge, NY – June 01, 2010 – Zoom is excited to announce availability and shipping dates for its smallest recorder to date, the new H1 Handy Recorder. Weighing in at about 2 oz, the H1 records big sound despite its tiny footprint and features the same studio-quality microphones as Zoom's renowned H2 – the most popular handheld recorder in the world. The H1 is priced at just $99, making it one of the most affordable professional recording solutions available.

"It's our smallest recorder ever," said Mark Wilder, Director of Marketing. "But don't let its size fool you. The H1 Handy Recorder features our studio-quality microphones and our award winning recording technology at a very affordable price."

The H1 is also the easiest Zoom recorder to use, sporting a newly designed user interface that places all its functions at the touch of a button. Zoom included access to the track marker, auto record, low cut filter, level and volume controls with onboard buttons and no menus.

The Zoom H1 Handy Recorder will be available everywhere on July 30 for $99.