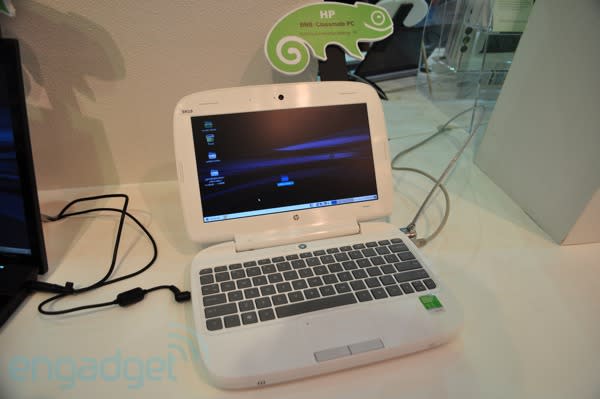 Even though school's just getting out in most places around the world, the bulk of companies start announcing their back to school laptops just about... now! And we'd bet you that this 10-inch Mini Classmate netbook (the final name is still TBD) is what HP has in store for the kiddies come this fall. Unlike the Mini 5102, which has previously aimed at the younger set, this here netbook is quite chunky and reminds us of the original Intel Classmate PC -- it's made entirely of plastic and has a handle on its back. The one on display was covered in a pretty unattractive marshmallow-ish white, but our wildest fantasies have HP offering it in a slew of colors. Other than that, it boasted a grey-colored chiclet keyboard, was running SuSE Linux 11 -- it was actually on display at the Novell booth -- and had an Intel Atom processor. That's all we know for now, though we're assuming there are a bunch of child-proof features that aren't evident to the naked eye. Head on past the break for a brief hands-on video of this heretofore unannounced mini machine. See more video at our hub!
In this article: childrens netbook, ChildrensNetbook, computex, computex 2010, Computex2010, hp, HP Mini, HP Mini Classmate, HpMini, HpMiniClassmate, impressions, linux, netbook, novell, preview, suse, video
All products recommended by Engadget are selected by our editorial team, independent of our parent company. Some of our stories include affiliate links. If you buy something through one of these links, we may earn an affiliate commission.
Share
Tweet
Share