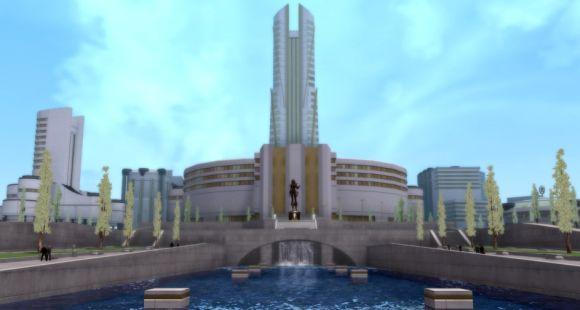 If you play City of Heroes, you're probably not counting the days until the release of Going Rogue just yet, as it's a little too far in the future. (Fifty-one days if you count today, incidentally.) But August will be here before we know it, and today the official site takes a look at a portion of the expansion which is at once easy to forget and yet ubiquitous: the world of Praetoria itself, the utopia created through absolute power. As we've known for quite some time, it's similar and yet slightly different when compared to the setting of Paragon City -- both familiar and threatening.

Emperor Cole's near-total salvation of humanity resulted in a sweeping change of the world as a whole, as discussed in Tyrant's biography quite some time ago. Praetoria is a world without borders or nationalities, wherein everyone is a citizen of the empire rather than the panoply of countries in the real world. The tantalizing hints of the world's architecture are readily visible in our gallery, which showcases both the concept art and the in-game layouts of the major new setting for the expansion. Take a look at our gallery, and head to the official site for more information on the twisted mirror of City of Heroes.

7
In this article: art, backstory, city-of-heroes, city-of-heroes-going-rogue, city-of-villains, coh, cov, cox, expansion, gallery, going-rogue, lore, ncsoft, paragon, paragon-studios, praetoria, previews, screenshots, setting, upcoming
All products recommended by Engadget are selected by our editorial team, independent of our parent company. Some of our stories include affiliate links. If you buy something through one of these links, we may earn an affiliate commission.
Share
Tweet
Share