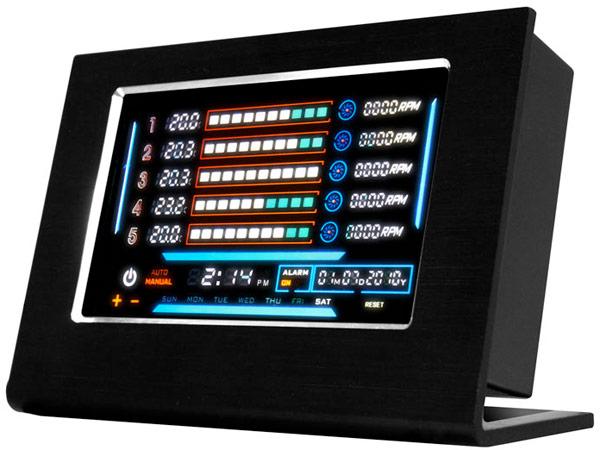 We know, you're probably scoffing at those mortals still using "fans" to "cool their gaming rigs," but unless you've thrown down the cheddar on a swank liquid cooling solution, you'll probably find yourself at least mildly interested here. NZXT has taken a break from the mice and keyboard routine to break out a rather unique piece of kit in the Sentry LXE. This touchscreen fan controller connects to one's desktop via PCIe, and from there provides finger control of up to five internal fans. Users can adjust each one individually, set it to automatically keep the machine at a given temperature or create a silence that would spook even the Reaper. As you'd expect, there's an inbuilt temperature alarm to notify you if temps head north of a designated point, and all this fun awaits you in exchange for a low, low $59.99. Head on past the break if you're in need of a video demonstration.

El Monte, CA – June 30, 2010 – NZXT, a company built on realizing the dreams of gamers worldwide, is proud to announce the Sentry LXE, a high performance external fan controller with an intuitive touch screen. Its unique patent-pending PCI card interface desktop design allows effortless control without having to reach underneath the desk to configure the settings. Some of the additional advanced features include...

Intuitive Touch Screen LCD – Advanced, touch screen LCD displays temperatures in C/F, RPMs, along with the date, time, and day of the week. Users have the ability to switch the display off for complete darkness for more immersive gaming sessions

Complete Control – 5 Temperature probes keep tabs on thermals throughout the case while the 5 Fan controllers adjust the fans' RPM speed. Allows users to automatically adjust the fan speeds to correspond to a specific temperature, manually customize for extreme overclocking capabilities, or set to absolute silence

"Sentry LXE is a unique blend of high performance, complete monitoring and control, intuitive operation, and sleek design" said Johnny Hou, Founder and Chief Designer at NZXT. "The customization capabilities are perfect for the enthusiast who wants to tweak every aspect of airflow and keep tabs on system thermals. Having already launched several highly-acclaimed fan controllers, we truly feel that Sentry LXE offers unparalleled value and is a must-have addition to any performance PC."

Sentry LXE will be available soon for the MSRP of $59.99. For more information visit http://www.nzxt.com/new/products/fan_control/sentry_lxe.

In this article: cooling, fan, fans, NZXT, pci, pci express, pcie, PciExpress, sentry, sentry lxe, SentryLxe, touch, touch screen, TouchScreen, video
All products recommended by Engadget are selected by our editorial team, independent of our parent company. Some of our stories include affiliate links. If you buy something through one of these links, we may earn an affiliate commission.
Share
Tweet
Share