S. Hollister
September 10th, 2010
In this article: 5.1 speakers, 5.1 Surround Sound, 5.1Speakers, 5.1SurroundSound, audio, Logitech, Logitech X-540, Logitech Z506, LogitechX-540, LogitechZ506, review, sound, speaker, speaker system, speakers, SpeakerSystem, subwoofer, Surround Sound, SurroundSound, X-540, Z506
Audiophiles are quick to name the umpteen flavors of Dolby, but at the risk of oversimplifying things a tad, there are just three types of surround sound today -- each easily identified by their plug. Virtual surround uses just simple stereo jacks, emulating multiple channels from two, while digital surround travels across optical or coaxial S/PDIF cables (or HDMI) and has to be decoded. Finally, there's analog surround sound -- the cheapest solution of all -- where you basically just plug a pair of dumb speakers into each of front, rear and center 3.5mm sockets on your existing PC sound card. Unsurprisingly, the $100 Logitech Z506 speakers use this last technique to deliver their true 5.1 sound, but that's no reason to count them out. The question is, do they deliver enough bang, boom and tweet for the buck? Read on to find out. 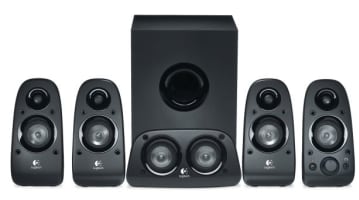 Truth be told, the Z506 is far from the company's first analog surround sound package -- it replaces the very similar X-540 setup from 2006, which was itself a upgrade of the $80 Logitech X-530 from 2004 -- but it's clear the company paid a bit more attention to aesthetics this time round. Where both previous packages were fairly symmetrical, boxy (in the case of the X-540) and had stands that jutted out, each of the Z506's satellites have a space-age elliptical design with gentle oblong curves. Here, the two-inch drivers aren't covered by metal grates, but rather gently protected by thin, springy mesh nets, and instead of two per satellite, each has one driver and a small tweeter -- except for the center, which has a pair of eyeballs that joyously remind us of Wall-E. We're also a big fan of the volume dial, if you can believe that, as it's smooth as can be -- just light enough to turn with a single finger, but still enough resistance that we could adjust the volume in fine increments. Yes, it's a pretty handsome looking package, all in all... but before you get too excited, know that it's a far less flexible one.

Setting up the Z506 actually takes less time than getting it out of the box, because every cable and port is color-coded -- just plug in four speakers and your audio sources into the back of the subwoofer, and you're done -- but that's assuming you don't have to rearrange your entire room to set it all up. You see, while the X-540 had a wired remote with all the controls plus adjustable stands that let you hang satellites on a wall, the Z506 puts the volume control on the right speaker, the bass control on the sub, and has absolutely no place for wall supports. This means you'll need to have the front speakers and subwoofer on your desk and within arm's reach if you want any control, and somehow also find flat surfaces immediately behind your desk as well -- or else move furniture around. Thankfully, the center satellite still has a clever folding mechanism that clamps onto an LCD monitor with ease. One single connectivity advantage over the X-540 comes in the shape of two new RCA jacks to connect an auxiliary audio source like a game console, but even this upside has a down -- anything you plug in is automatically virtualized across all five speakers, whereas the X-540 let you control "Matrix Mode" with a button on the remote. We don't really expect digital surround in this price range (though it'd be nice if Logitech didn't even suggest the system could do 5.1 from game consoles and the like) but we can't hide our disappointment at Logitech's backward decisions here.

For all our gripes about the important features Logitech took away, one thing that hasn't changed is the stellar sound. While the Z506 satellites didn't quite match up with our aging Boston Acoustics BA7500 when we set them side-by-side -- the latter producing slightly clearer and richer sound -- we didn't really expect them to, and they came close enough for the price that we were honestly quite pleasantly surprised. 75 watts of RMS power was enough to fill a bedroom with audio and plenty to spare -- we often found our tunes were loud enough to get the full effect at 50 percent volume. Though the subwoofer didn't quite shake the room from its perch on our desk, there was definitely a good bit of bass -- we could definitely see the kit pumping jams at a small house party if that's your thing -- but of course, the system truly shines in surround sound movies, concerts and games.

The feeling of immersion in Hero's guqin courtyard fight scene was fantastic, with raindrops hitting the pavement all around, and we felt every bullet whiz by during Neo's infamous bullet dodge in The Matrix thanks to punchy front and rear sound. Solitary singers came through high and clear in the front and center channels, their words reverberating off the auditorium walls behind us, while orchestral pieces and applause shared the front but with a welcome rear bias. Tossing flaming barrels with our Half-Life 2 gravity gun, than quickly turning away, we could easily tell by audio alone in which direction they'd exploded, and the worlds of Mass Effect 2 took on an incredible sense of immediacy with futuristic advertisements and alien conversations bombarding our ears from all directions at once. In other words: surround sound kicks ass, and these speakers are excellent boots.

If you've never experienced true 5.1 surround sound, have a capable sound card and your content primarily resides on your PC, the $100 Logitech Z506 are a fantastic introduction, but we can't honestly recommend them over the company's far-more flexible X-540 set -- the obvious choice at the $90 you can presently find them for. When it comes to analog surround sound, anyone can hook up two or three sets of quality two-channel speakers to get a similar effect, so the onus is on Logitech to make combo 5.1 packages like this easy to use and set up. We're mystified why the firm would ever introduce a package with less bang for the buck.