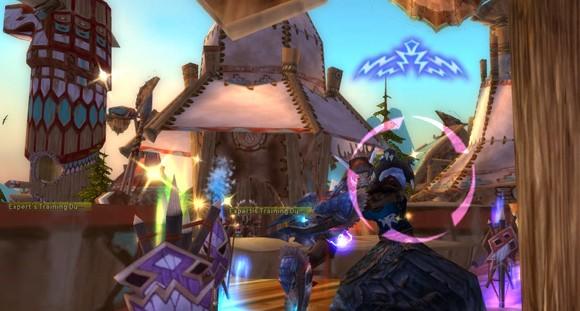 Every week, WoW Insider brings you Totem Talk for elemental, enhancement, and restoration shamans. Rich Maloy lives and breathes enhancement: his main spec is enhance, his off-spec is enhance. He blogs about the life and times of enhance and leads the guild Big Crits (Season 2 Ep 04 now out!) as the enhancement shaman Stoneybaby.

This patch hit me hard, harder than any patch before it, and I know I wasn't the only was one to be drastically affected by it. Other than the usual spate of patch-related addon issues, I was struggling to keep the downloader connected. After turning off all anti-virus, firewall and other sorts of computer safety monitoring programs, I finally got into game on Friday night. Mostly, though, I just lacked time to log in this week. Once in game, I was faced with just as many challenges getting Stoney in order and raid-ready as I was trying to get online. This patch was more disruptive in game than any patch before.

A far an enhancement goes, there's so much that still needs to be tested and refined. The greater enhancement community is working hard at the theorycrafting, but even the simulations are not fully refined for level 80 testing; the latest alpha of EnhSim is tuned to level 85 right now. The decisions I made in game are based on the best available data as well as some things I want to test out for myself. There was a lot to accomplish in-game including, respeccing, retraining, regemming, reforging, readjusting and refining.

Starting with the respec, I went 5/31/0. I went with 2/2 Improved Fire Nova over 2/3 Improved Shields. This will be helpful in heroic Halion, or any fight with adds where I can take advantage of Magma or Fire Elemental totems. The extra 10 percent gain to Lightning Shield, which will be only between 3 to 4 percent of our total damage, wasn't that appealing to me. Also, I went with 2/3 Acuity and 3/3 Concussion, instead of 3/3 Acuity with 2/3 Concussion. This is an experiment that I need to test out; my working theory is that because I'm moving away from crit and towards elemental damage, the extra damage to my main spells will be better than a little more crit.

After making my spec choices, I rode over to the trainer to pick up some fun new stuff including Bind Elemental, Cleanse Spirit and Totem of Tranquil Mind. More importantly, though, I was sure to train my mastery, Enhanced Elements. Mmmmm, delicious elemental damage. Next, it was time to check caps. I was close to the hit cap and right on the expertise cap, so the process was going to be easy for me.

Midway through this process, I realized that Bizuri's Totem of Shattered Ice was no longer the right choice for enhance; the intellect is inferior to the agility on enhancement totems. I had a Totem of Quaking Earth in my bags and put that on. If you don't have an enhancement-focused totem lying around, Totem of the Avalanche is probably a better choice, after reforing the crit to expertise. But because I had a Quaking Earth available, I opted to use it, and with two gem changes, my expertise capped out exactly at 140.

I love hitting the caps dead on. I did with expertise, but I needed a little more for hit. Rather than reforge for it, I worked it out with gems. Ah yes, gems.

Time to regem and reforge

Remember my advice from last week in my path to victory post to buy your gems now, "because after that patch drops, you'll be paying double or triple pre-patch prices just to get back to raid-ready status"? If only I had heeded my own advice. I needed 11 cardinal rubies, two dragon's eyes (I'm a JC), and one ametrine. I did not have nearly enough justice points for all of those gems. Thankfully, by Friday night, the market was not hyper-inflated and I was only paying around 110 gold per gem.

Next up, reforging! I decided to start out reforging entirely for mastery. I really wanted to sim out the optimal reforging choices but simply didn't have enough time. Reforging is easy enough, and given enough gold, you can do it as often as you want. I opted to replace crit with mastery on all items except two. My cloak has 68 haste rating and 60 critical strike rating, so there I reforged the haste to mastery, and Band of the Bone Colossus had haste and hit, so again I reforged the haste to mastery. Everything else that had crit was reforged to mastery. I ended up with melee crit dropping from 57.27 percent (taking the regemming to agility into account) down to 47.90 percent, but mastery rating jumped from 8.00 to 18.96.

The last bit of prep work was redoing my action bars. I use a Razer Naga -- a perfect mouse for all the spells in enhancement -- so my bars are set in a 3x4 configuration to match the button layout on the side of the Naga. From an action bar standpoint, very little changed. I moved Ghost Wolf to my bars permanently, replaced Magma Totem with a Searing Totem / Magma Totem macro, and changed my self-heal macro to use Greater Healing Wave instead of Healing Wave. My keybinds are as follows:

Those are the buttons, but what's the priority? I can tell you what other people are doing and what I'll be trying, but it will be based on their research, not mine. As I mentioned above, EnhSim is currently tuned for level 85, and there are tweaks you can make to get it to work for level 80 sims, but I'm not sure my results are accurate. For now, here is the modified, single-target priority:
There are a few points worthy of note about this list. First, yes use LL on every cooldown. That Searing Totem is one angry little thing and your target will have five stacks before you know it. Even if it doesn't have a five-stack, use LL if it's up in the priority.

Next, Flame Shock is still worth casting, despite the DoT's not being hastened. Well, that's not entirely accurate. The DoTs will tick faster the more haste you have, but the duration of the DoT on your target remains the same. So you may end up getting a few extra ticks of FS before it expires, whereas before it was a set amount of ticks, just ticking off faster. Short story: Use Flame Shock when available.

As for Fire Elemental Totem, it is definitely still a DPS increase to use in multi-target fights. Heroic Halion 25-man comes to mind, for one. Likewise, Magma Totem with Fire Nova will also be a DPS increase if doing damage to adds is a priority. However, on a fight like Lich King, regular and heroic, I would favor a Searing Totem. The damage in phase one is inconsequential because you use the Necrotic Plague to kill the adds; then in phase 2, single-target DPS is a priority.

Finally, everyone was astounded to see Shammy Rage (with a two-piece tier 10 bonus) at the bottom, but no matter how you slice the numbers in the sims, it comes out as our lowest priority; at some point you have to trust the data and adjust your play accordingly. And the other thing the sims show is that an attacking fire totem (Searing, Magma, or elemental) down 100 percent of the time is essential to maximize your output.

At this point, all of my decisions are based on theorycrafting and judgment calls. Next week, once I've had a chance to raid, test it out on different fights, and compare simulations to real data, I'll report back on what's working and what's not. Until then ...