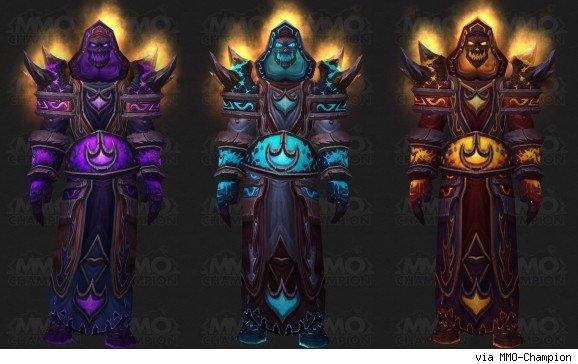 Every week, WoW Insider brings you Arcane Brilliance for arcane, fire and frost mages. This week, Arcane Brilliance brings you a random collection of thoughts, impressions, half-baked ideas, and unprovoked hatred for warlocks spawned in the wake of the single most significant patch in the history of WoW. But then again ... except for the patch part, that pretty much describes every Arcane Brilliance, right?

I thought I'd throw that picture of the tier 11 mage set up there to start the article because it looks so awesome. Someone in the comments section last week suggested I spend an entire column waxing poetic about how cool our tier 11 looks, and I want you to know that I gave the idea serious consideration. Could I come up with a thousand words on one set of gear? Yes, yes I could. Would it be worth reading? No, probably not. But did I want to do it anyway? Yes, yes I did. Let's leave it at this: I really, really want to put that flaming skull mask on my mage's face, and I don't care how many warlocks raid bosses I have to kill to make that happen.

So now that the insanity of patch week has come and gone, how are you coping? Got your mage's specs all sorted out? Comfortable with your new spell rotation yet? Updated all your addons? Disconnected a few dozen times trying to summon the Headless Horseman? If you're still looking for a bit of help, check out last week's column on mage specs, glyphs, and spell rotations for a basic primer. This week, I figure I'd just spend the column going over a bunch of stuff I ran out of room to mention last week, along with a few new things that have occurred to me during this week's play.

To recap: Firestarter is a new fire talent that allows you to cast Scorch while moving. With no additional description required, this is already cool enough. It gives you something to cast during movement periods in fights and provides a powerful PvP tool. Even if that was all the benefit the talent provided, the single point spent there would still be a no-brainer. But this past week, as I've experimented a bit with the spec, I've found some extra bonus awesomeness that stems from this talent that I feel compelled to share.

First of all, did you realize that "while moving" also includes "while falling?" Because it totally does. Let us briefly consider the ramifications of this. Imagine flying on your mount above Wintergrasp. Now imagine you see a warlock, hovering up there, maybe AFK, maybe distracted by a Fallout Boy video on the MTV. Or whatever channel still shows music videos these days. You decide that warlock's time has come. But he's so far up in the sky! What to do? Let's think for a moment. We have a spell called Slow Fall ... and a Scorch spell that can be spammed while falling ... and the promise of instant Pyroblasts to come ...

I can see you all, sitting at your computer, nodding slowly in unison, a gleeful grin spreading slowly across your collective faces.

One other thing to consider: two points in Improved Scorch makes the spell completely free to cast. Now, I'm not suggesting that you take that talent and eschew Fireball altogether, relying upon Scorch spam for your primary nuke from now on. The DPS numbers for Scorch-spam versus Fireball spam are fairly close at level 80 from what I've seen, but I haven't even begun to look at any hard theorycrafting on the subject. The idea of a mana-free primary nuke you can spam while moving is undeniably attractive, but I can't recommend the concept without numbers to back it up. Does the shorter cast time, which in turn provides more frequent Hot Streak procs, outweigh the smaller Ignite procs, lower base damage and spell-power coefficient? What about the ability to cast a completely free primary nuke during longer, more mana-intensive encounters? We run low on mana, but we can always switch to Scorch spam, not only conserving mana but returning it through Master of Elements. The possibilities are still bouncing around my brain right now, joyous little balls of magely potential. More on this as I figure it out.

Good gravy, I could do a whole column on Scorch.

As a great number of you pointed out last week, our prime/major glyph situation is all kinds of buggy. A large number of mage glyphs that should be prime are currently considered major (cough ... Fireball), and in one case (cough ... Mage Armor), don't even exist in game anymore. Mage Armor's glyph isn't in any scribe's recipe list post-patch, so unless you already had the glyph on your mage prior to the patch or had one lying around in your inventory, you can't learn it. Since Mage Armor is pretty much a mandatory glyph for Arcane mages, this is a problem.

Thankfully, the issue should, hopefully, be hotfixed very soon. Once the problems go away, though, we'll have to readjust our glyphing strategies. Whereas now most mage specs don't even have three worthwhile prime glyphs to apply, after the hotfix we'll actually have to make some hard decisions as to which of several quality prime glyphs to go with. Good thing we can switch in and out on the fly, huh? Look for some more glyph content in a future column after this stuff gets sorted out.

I'm not even kidding. If you are a fire mage, you need to download this addon right this second. It's incredibly simple, but so unequivocally useful it's kind of ridiculous. All it does is visually track your DoT effects on your primary target for you so you can easily tell when it's a good time to hit your Combustion button. Go get it now.

You are no longer hit-capped

Well maybe you are by now, but you may be one of the many mages I've been running into lately who haven't quite gotten around to adjusting their mage to the fact that we no longer have any hit talents. Seriously, guys. Elemental Precision is no more. That means you've got to add hit rating to hit the cap. My quick fix was to replace one of my trinkets temporarily with Maghia's Misguided Quill, available from the old Frost Emblem vendor for the low, low price of 695 Justice Points. You may have better luck with a combination of regemming and/or reforging some of your gear. In any event, check your hit percentage. Is it capped? Do you have 0% chance to miss a raid boss? No? Then you need to make recapping your hit your first priority before trying to raid. Do whatever it takes and get there. I'll remind everyone since it's been awhile since we talked about it: raising your hit is the single most effective way to raise your DPS until you reach the cap.

It used to raise your crit rating thanks to Molten Armor, but not any more. Other classes got talents that convert spirit into extra hit rating, but not mages. Take a look at your gear. My guess is that some of the stuff you're wearing has spirit on it. You may still have the occasional Purified Dreadstone in a gem slot or two. Here's the deal:

All of that spirit -- every last point of it -- is completely worthless. Spirit is a healer stat now. The only benefit it provides for mages is out-of-combat mana regen, something that hasn't been even marginally useful since the early days of vanilla WoW, and even then it kind of sucked.

So regem those slots, and reforge as much of the spirit on your gear to something more useful. Like hit!

You can rename your water elemental

Got a lot of tips on this one. Just copy/paste the following into your chat bar:

Disclaimer: This only works once. That means if you try to fool around and name your big blue buddy something stupid to test things out, you're stuck with that name. Don't be the guy running around with a water elemental called "Bob." Unless that's a name you really like. Think carefully. Also, this may or may not be a bug, and it could very well go away the moment Blizzard decides to fix it.

True story, I named mine "Warlocktears" and was very proud of that name. I thought I was incredibly clever. Then, literally like five minutes later, I get the following email and screenshot from a reader named Marcus:

While stumbling around the mage forums, I found a post on how to rename your water elemental!

The command is as follows:
/run PetRename("NAME")

Replace NAME with your bubbly buddy's new name (mine was appropriately named "WarlockTears").

Yeah, so apparently great minds think alike? I'm just not that creative? Loads of people hate warlocks and want to imagine that their water elemental is the giant, animated evidence of their girlish weeping? Anyway, have fun renaming your elemental.

The name is permanent for now, meaning it will stay through death, resummons, logging in and out, spec-switches, respeccing, and anything else you can think of. Cool, huh? To anyone from Blizzard who might be reading this: Don't take this away from us. Just leave it alone. Don't nerf our fun. There's absolutely no sense in it.

That's it for this week. Here's hoping everyone's enjoying Blizzcon. I really, really wish I could have been there. I simply could not get the time off this year. There's always next year, right?