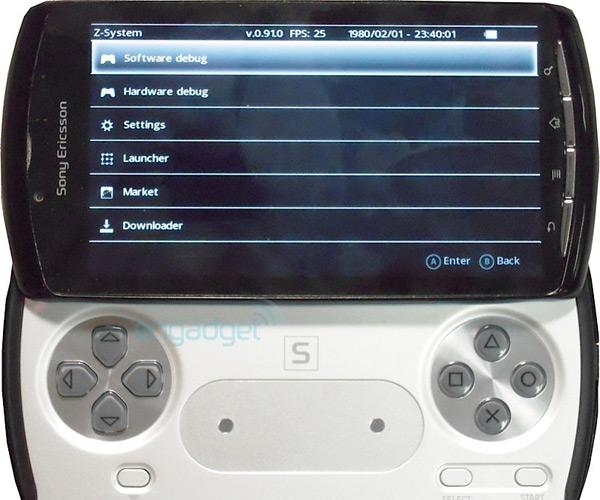 Earnings calls aren't usually that interesting, and that's doubly true when trying to listen via official translators. Still, we couldn't help but give an ear to Sony's fiscals, and sure enough, someone asked about our (still real) PlayStation Phone leak. We're not sure who answered since it's through interpreter, either Executive VP / CFO Masaru Kato or Senior General Manager of Investor Relations Division Gen Tsuchikawa (we're assuming the former).

Citing the aforementioned device, the curious party asked if such a product would come out of Sony or of Sony Ericsson, and no, it wasn't a complete denial. Instead, we're told just how such a device would happen, that a gaming phone would be planned and prototyped under the (recently restructured) Network Services umbrella. We're also told how SCE's move to Sony City headquarters now puts them closer to the planning and engineering group, meaning the company "can better incorporate all these capabilities better... so when the timing is right we can probably announce to you the new product we have." Ericsson is later cited as a resource "on smartphone and for the games devices," although this might be something peculiar with translation. Again, that's far from a confirmation, but they're certainly entertaining the notion in a very, very detailed response.

But that's not all; there's also apparently a tablet brewing in the background, one that would obviously fall somewhere in between PC and Sony Ericsson's efforts. There isn't much else said, but if you're up for psychoanalyzing executive commentary, we've transcribed and placed the full quote after the break.

...As for the new PSP product, as mentioned, I know that you are not asking me to tell you when we will be coming out with a new product, but there is a gaming market based on [the] cellphones, and there are many changes that are being seen [with] Nintendo, as well as ourselves, in the field of the product for the gamers. And there are smartphones and others or even cellphones gaming markets are very popular here in japan. So the market itself is very... expanding.

It's not that we are not looking into those markets as well. We will look into those markets in trying to develop strategy for the future. Of course, we can't talk about specific products, but smartphones and tablets... it is difficult to tell you how we can put the games on them, but they are not going to be planned in different parts of our company. When we organized ourselves last April, we introduced network services, and within that umbrella, network services, all of these products are handled. Therefore, the planning and the prototypes for various content [are] all carried out within this... one umbrellas. So we are trying to figure out what we can do as Sony in this market. I think this is as far as I can tell you regarding these products at market.

There [are] so many different elements. There is Sony Ericsson and there is SCE. They moved from Aoyama, the design and headquarters had to come to Sony City. Of course this contributes to savings on rent on an office... but they are [also] closer to the planning and engineering group of Sony, and I think we can better incorporate all of these capabilities better... so when the timing is right we can probably announce [to] you about the new product that we have.

As for tablet, and this, too, we will not be able to tell you when and what kind of product. But obviously as a mobile strategy, this occupies a very important position. On one hand there is PC, and on the other hand there is [the] joint venture with Ericsson on smartphone and for the games devices. And tablets, some fall somewhere in between, and it is true Apple has led the market, but when we are to enter the market, we would like to put a Sony character onto the... a new product, and that is the effort we are making right now. Therefore I think you can hope for a very good product to come out.

In this article: ericsson, playstation, playstation phone, PlaystationPhone, project zeus, ProjectZeus, ps phone, psp, psp phone, PsPhone, PspPhone, sce, sony, sony ericsson, SonyEricsson, tablet, z system, z-system, zeus, ZSystem
All products recommended by Engadget are selected by our editorial team, independent of our parent company. Some of our stories include affiliate links. If you buy something through one of these links, we may earn an affiliate commission.
Share
Tweet
Share