Corsair's speedy, flaming red Force GT SSD goes on sale this month for $149 and up 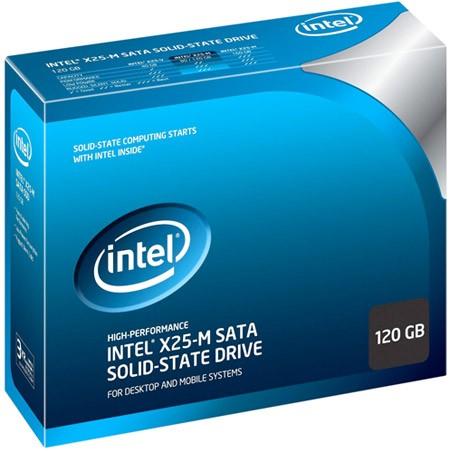 Face it, for the average consumer, solid-state drives still have a price-to-storage issue -- but once you get used to the quick and quiet performance, it's hard to go back. If you're willing to take the dive, or already have and are looking to swap out / upgrade, Intel's lowered the suggested price of its 80GB and 160GB X25-M SSDs to $199 and $415, respectively. Looking to take the middle road? Introducing the 120GB X25-M from the House of All Things Blue. That'll set you back $275, but hey, 'tis the season. Press release after the break.
Show full PR text
Intel Lowers Prices on Solid-State Drives
In Time for Holiday Buying Season

NEWS HIGHLIGHTS
· Intel® Solid-State Drives (SSDs) are more affordable with new pricing in time for holidays
· SSDs replace hard drives for a rugged, low-power performance boost of up to 56 percent
· New Intel® X25-M 120GB SSD, with a price of $249, can store operating system, favorite apps plus thousands of songs or photos

SANTA CLARA, Calif., Nov. 12, 2010 – Just in time for the holiday buying season, Intel Corporation has lowered prices and introduced a new model of its award-winning Intel® Solid-State Drive (SSD) product line. SSDs can replace hard disk drives in a PC and provide a substantial performance boost for a notebook or desktop PC, making SSDs one of the hottest new waves in personal computing.

For shoppers looking for the latest high-tech gadget for that intensive PC user or gamer, Intel SSDs can help improve overall system performance by up to 56 percent.* SSDs can replace or complement a traditional hard drive in a notebook or desktop PC and deliver noticeably faster computer performance when booting up, opening files and running software applications. With no moving parts, these SSDs deliver greater reliability and consume less power than conventional hard disk drives (HDDs).

"Every Christmas, consumers are looking for the latest tech gadget; this year, with prices dropping, the solid-state drive is becoming more mainstream and can make the single greatest improvement to PC performance," said Troy Winslow, director of product marketing for the Intel NAND Solutions Group. "With an SSD, tech shoppers can give the gift of a technology makeover that will help speed up, or breathe new life, into a current PC by just swapping out the hard drive for an SSD."

New suggested U.S. resell pricing for the Intel® X25-M Mainstream SATA SSD is now $199 for an 80 gigabyte (GB) drive, which provides plenty of space to store the operating system, multiple office and personal applications, as well as thousands of songs, photos, video and other data. Users can double the storage capacity with a 160GB X25-M drive for $415. The company has also added a new 120GB version of the Intel X25-M for $249, which offers the best dollar-per-GB value in the Intel X25-M SSD line.

Intel SSDs can be purchased at Best Buy or Fry's Electronics nationwide or online from Internet outlets such as Amazon.com or newegg.com. An entry-level 40GB Intel X25-V "boot drive," at a suggested U.S. resell price of $99, is another option for desktop users that allows the operating system and favorite applications to be installed on the SSD for faster performance, while keeping the HDD for further storage.

To begin enjoying the high-performance world of solid-state computing, users can install their own SSD, have a computer technician install it for them or purchase a brand new system from HP, Lenovo and others with an Intel SSD already pre-installed. To make the process of copying, or cloning data, from a user's old hard drive to a speedy new Intel SSD, Intel also includes a free cloning utility called the Intel® Data Migration Software. The easy-to-use IntelData Migration Software will help transfer information from the old hard drive, including operating systems, applications, documents and personal settings, in just minutes. It can be downloaded free of charge at www.intel.com/go/ssdinstallation.

More information on Intel SSDs can be found at www.intel.com/go/ssd and by visiting the full multimedia press kit at www.intel.com/pressroom/kits/ssd. Follow Intel SSDs on Twitter: @intelssd, Facebook: Intel Solid State Drive (Official) or communities.intel.com.
Intel (NASDAQ: INTC) is a world leader in computing innovation. The company designs and builds the essential technologies that serve as the foundation for the world's computing devices. Additional information about Intel is available at newsroom.intel.com and blogs.intel.com.
In this article: 120GB, intel, intel x25-m, IntelX25-m, solid state, solid state drive, SolidState, SolidStateDrive, ssd, x25 m, x25-m, X25M
All products recommended by Engadget are selected by our editorial team, independent of our parent company. Some of our stories include affiliate links. If you buy something through one of these links, we may earn an affiliate commission.
Share
Tweet
Share