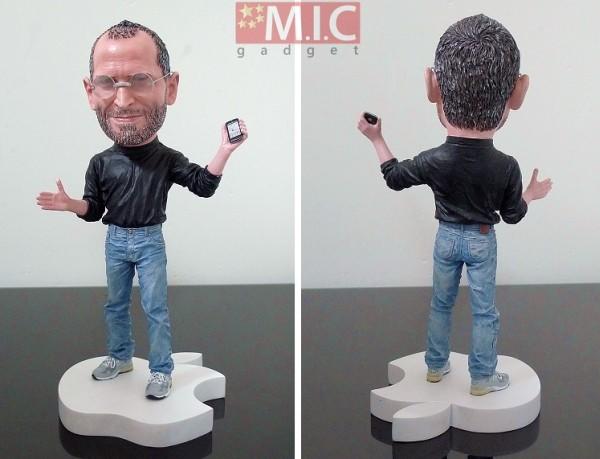 The Steve Jobs action figure has been making the rounds of the Internet in the last few days. Rocking a black turtleneck, blue jeans, and an iPhone, the magical and revolutionary replication of Apple's chief honcho has been a huge hit for many fans of Apple. Unfortunately, according to M.I.C. gadget, Apple has already kindly asked M.I.C. gadget to cease the marketing and sale of the figure since they never gave any kind of permission for use of Apple's copyrights and trademarks.

Still, the figure looked like it was pretty awesome. The figure's likeness to Steve Jobs was unmistakable, and the level of detail was kind of crazy. The tiny little iPhone the figure held even had the Apple logo on the back of it. The figure came with speech bubbles you could fill out yourself, empowering little Steve to say things like "Magical and Revolutionary," and "One more thing." I might quibble a tad with the use of the phrase "action figure" to describe the miniature statue, but the overall effect is awesome enough that they can call it that if they want.

While it's regrettable that the Steve Jobs action figure is no longer on the market, we can hope that Apple sees the demand for such a thing and creates their own version.

[M.I.C. gadget via Engadget]
In this article: action-figure, steve jobs, steve-jobs, steve-jobs-action-figure, SteveJobs, toy
All products recommended by Engadget are selected by our editorial team, independent of our parent company. Some of our stories include affiliate links. If you buy something through one of these links, we may earn an affiliate commission.
Share
Tweet
Share