J. Stern
December 7th, 2010
In this article: BestBuy, Core i5, CoreI5, Intel, intel core 2010, IntelCore2010, laptop, laptops, nvidia, nVidia GeForce, NVIDIA GeForce 310, NvidiaGeforce, NvidiaGeforce310, QX410, review, samsung, Samsung QX410, SamsungQx410, samung
Just $799? Wait, really? Indeed, it's quite hard to grasp that the Samsung QX410 costs under $800, and when you hear about what you get for the money, you'll understand exactly why. The system not only packs some seriously impressive specs -- a Core i5 processor, NVIDIA GeForce 310M GPU with Optimus, and a 640GB hard drive – but it's also got an aluminum lid, flush glass 14-inch display, and is just an inch thick. And on top of all of that, you can stream video to your TV with Intel's WiDi and get on a fast WiMAX network without an extra dongle. So yeah, on paper it's a killer deal, but after spending a week with the rig do we still feel the same way? Or do we suggest you keep shaking the piggy bank until you can come up with an extra $200 for the Envy 14 or a Dell XPS 14? Find out in our full review! %Gallery-109374%
Samsung
0
SCORE
Engadget
N/A
Critics
1 review
80
Users - Not yet scored
N/A 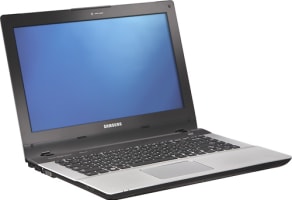 We have a sneaking suspicion that the QX410's squared edges and clean grayish aluminum lid were designed with the business professional in mind, but we're more than fine with the simplistic look. Hey, any laptop that ditches glossy plastics and odd patterns is a win in our book. However, it's the actual build of the QX410 that has us really taken -- that aforementioned aluminum lid feels tough as nails, and while the metal doesn't extend to the bottom of the system, the plastic underside shows no noticeable bend. Even under the lid, the silver aluminum palmrest and keyboard deck look and feel great. Now, we're not going to say the laptop feels as rigid as the entirely aluminum Envy 14, but it undoubtedly feels better than the majority of systems under $1,000.

Samsung also did a very nice job of keeping the QX410 thin and light. The 1.07-inch laptop is noticeably trimmer than the 1.3-inch Dell XPS 14, and the 5.07-pound system is slightly lighter (0.13 pounds, to be exact) than the Envy 14. We shoved the rig and its AC adapter into a shoulder bag and still had left over space for our Galaxy Tab, a mean turkey sandwich, a Diet Coke, and a (predictably empty) wallet. Naturally, the machine is well stocked with ports – the left edge is home to VGA, Ethernet, HDMI, headphone, and microphone ports as well as two USB jacks. We're not the biggest fans of the plastic latch covering the HDMI and USB connectors -- it's clumsy and hard to get to them -- and we've consistently wondered why only these ports got the protective treatment. Were the Ethernet and VGA not good enough? The right edge is home to the optical drive, a 5-in-1 media card, and one remaining USB port.

There's something about the curved keys on the QX410's chiclet keyboard that reminds us a lot of the ones on the Sony VAIO Z, and believe us, that's a very good thing. Surrounded by an aluminum deck, there's absolutely no flex to the panel, and the matte keys themselves felt great under our fingers while writing this review. They're a little bouncy, but not overly so. There's one thing that could have made the keyboard better, of course -- a backlight. Above the keyboard are dedicated volume controls and a WiFi on / off button.

Samsung went ahead and put a Synaptics ClickPad, or what it's calling a SuperButton, on the QX4120's palmrest, and while we still have some issues with it, it's one of the best single-button touchpads we've used on a PC. Of course, that's not exactly saying much since our experience with HP and Dell's ClickPads have been less than stellar. It's still not as good as Synaptics' next generation pad, which we recently tested, but keeping our right thumb on the left mouse button and our index finger on the pad let us comfortably point and click -- it's when you stray from this positioning that you run into jumping cursor trouble. The metal pad itself is very smooth, and surprisingly responsive to multitouch gestures – two finger scrolling was actually very fluid as was pinching-to-zoom in programs like Microsoft Word and Firefox.

The 14-inch, 1366x768-resolution edge-to-edge display is very nice on the eyes. (What is it about a flush displays that just makes things on screen look even better?) A 720p Burlesque trailer looked incredibly crisp and bright, though we do wish there was an option to pay a bit more for the system with a higher resolution display. Viewing angles weren't terrible actually – sharing the screen with a friend didn't require much adjustment, while tilting the screen backwards a bit when watching a few YouTube clips didn't cause too much color distortion. The speakers above the keyboard are fine for listening to music while you work, but they don't hold a candle to the Dell XPS 14's JBL speakers when watching a movie or playing a game. In fact, they're really not all that loud or full in comparison to even standard laptop speakers.

As you'd expect, the QX410's Core i5-460M processor and NVIDIA GeForce 310M provide rock-solid performance. Bundled with 4GB of RAM and a 640GB 5,400rpm hard drive, the machine had no issues handling our usual day-to-day activities, including simultaneously writing this review in Word Starter 2010, running Firefox with over ten tabs open, listening to music in iTunes and monitoring our thrilling Twitter feed in TweetDeck. Even when we threw in a DVD the system kept up at a brisk pace. Those thinking this thing would just sail with an SSD would be 100 percent correct, and there's a latch on the bottom of the system that'll allow you to pull the 5,400rpm drive out and swap it in for something faster.

On the graphics front, the 310M GPU and 512MB of RAM seem a bit outdated since the introduction of the GeForce 400M series, which is in the Dell XPS 14, but it still pushes along local and flash HD content flawlessly and reasonably handles some mainstream games. We fired up Arkham Asylum and had Batman kicking Joker's posse to the ground at an average of 26fps. Clearly the chart above shows that the graphics performance of the Envy 14 and the XPS 14 is about double that of the QX410, but like we said, its fine for everyday activities -- just not high end gaming. Also, the rig packs NVIDIA's Optimus, so we didn't actually have to flick the switch on the GPU for those graphics-intensive tasks – the software and hardware combo took care of it all.

The QX410 joins the ASUS U33Jc as being one of the first laptops to combine Intel's WiDi with a discrete GPU. Unfortunately, the wireless display technology doesn't yet allow you to tap the graphics power, but we had no issues connecting the laptop to our 40-inch Toshiba HDTV with the Netgear Push2TV box and streaming 720p content (it chokes on 1080p clips). Note that Best Buy doesn't actually include the Netgear box with the system, so you'll have to fork over an extra $99 at checkout if you want to stream Modern Family to the big screen.

For a 14-inch laptop with discrete graphics, the battery life on the QX410 is definitely impressive. On our battery test, which loops the same standard definition video at 65 brightness with WiFi on, the 61Wh six-cell battery lasted four hours and 45 minutes with the GPU off. In actual use we got closer to five hours and 15 minutes, which beats out both the HP Envy 14 and the XPS 14. Unfortunately, there's no way to actually swap out the battery, which means you better grab a coach seat with an outlet since there's going to be no buying an extra cell.

The QX410 comes equipped with an embedded WiMax modem. We were able to jump onto the Sprint / Clear WiMAX network in New York City, buy a $10 pass, and enjoy some solid 4G speeds. In our high rise office building we got an average of 1.24 Mbps download speeds and .33Mbps on the uplink. Out and about the city, speeds were stronger with 1.33Mbps download and .44 Mbps upload. It's no LTE, but it's embedded and doesn't stick out of the laptop like a sore thumb. However, you get WiMAX in place of Bluetooth it seems, which is a definitely downer for those with BT mice and keyboards in their arsenal.

And here comes our major complaint about the system, and that has to do with the amount of software that Samsung bundles with this laptop. It's just downright irritating. The Samsung folder contains 11 proprietary programs including, Battery Life Extender, Easy Network Manager, Easy File Share, and lots of others. Samsung, why don't you just bundle those all together into one killer settings application? Just a thought. There's also other third-party software like CyberLink's DVD and YouCam, and because this is a Best Buy model, it comes with Best Buy's PC app, which really just provides a portal to a software store. Oh, and don't forget Norton Internet Security. Point being, there's a lot of preloaded stuff here, and your best bet is to spend 30 minutes uninstalling all the things you'll never ever use to free up space.

It's pretty obvious what we're going say here: for $799 the QX410 isn't just a good deal, it's a great one. Sure, we knew the specs were impressive, but the machine impresses even more when you get it out of the box, start typing on its awesome chiclet keyboard, and realize you get tip-top performance for over five hours on a charge. Of course, the Envy 14 is made of tougher stuff and provides stronger graphics muscle, and the XPS 14 has way better speakers, but ultimately if you want a speedy and svelte mainstream system for under $800, the QX410 is a sure-fire bet.
All products recommended by Engadget are selected by our editorial team, independent of our parent company. Some of our stories include affiliate links. If you buy something through one of these links, we may earn an affiliate commission.