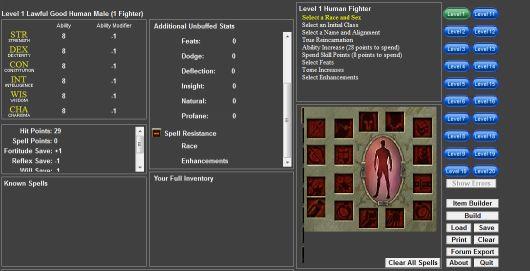 Many MMOs share a common factor that can either be a fun challenge or a complete frustration: the inability to respec your character. From a lore or storytelling perspective, it makes perfect sense. You wouldn't train as an archer for years and become highly skilled then expect to change your mind one day and immediately be an expert swordsman.

Dungeons and Dragons Online is an MMO that has this characteristic. You can respec through reincarnation, of course, but it will cost you. Reincarnation gives you more points to spend, so it definitely has that advantage, but usually it's better to know what you're doing from the outset. I mentioned quite a while back that I recommend you cycle through a few low-level classes as a new player in order to get a feel for point distribution and the strengths and weaknesses of each race and class, but there's another tool that's well worth knowing.

Follow along after the jump and let's look at the DDO Character Planner.

What is this thing and where did it come from?

The Character Planner is the brainchild of Ron Hiler, who recognized the downside of finding problems with a character build when it was far too late to fix it: "You can think of it as a sandbox, where you can try out your ideas without spending hours, days, or weeks in DDO creating a character and leveling them up only to discover a fatal flaw in your build when it's too late to do anything about it. The planner is a place where you can see the effects of your decisions within minutes."

Granted, for some, learning in the way that Ron described is a big part of the fun of the game. There's certainly nothing wrong with that -- one of the great things about gaming is that there is literally something for every gaming style. Not everyone has the time or inclination for this, though, and it's for those people that Ron and his team keep the Character Planner active and updated.

The character planner is currently on version 3.8.0 and can be downloaded free straight from the site. It's a fantastic tool not only for planning out a build, but for getting a feel for what combinations will and will not work. The Character Planner highlights flaws in a build immediately, allowing you to adjust and experiment to your heart's content.

The Character Planner's creator has a great detailed tutorial, but you're going to need to spend some time learning. Don't be turned off by the wall of text -- once you have taken the time to learn this, you will be grateful many times over that you did. The download and install is a quick and simple process, so once you're done with that, let's take a look at the tutorial.

The tour of the interface is where you'll first really begin digging in and figuring this program out, and I cannot stress enough that you read through it with the Character Planner open. With each section, pause and take a peek at the area of the Program that he's talking about. I've found that nearly every problem people have using the Character Planner stems from not being familiar enough with the interface. Gaining that familiarity is extremely important.

The next section, "Creating a Character," helps you with exactly that. Again, don't be turned off by the wall o' text, but go through step-by-step and build the sample character.

Remember when I said that the Character Planner will highlight errors quickly? Continue the tutorial into the "Handling Creation Errors" section -- Ron will teach you how to deal with errors by having you change your sample character and give him an "illegal" build component. It's good to know exactly what the interface looks like when you do something wrong, as well as how to undo it, because you're probably going to make mistakes as you go in the future. It's simply part of the learning process.

You'll be guided through equipment in a similar fashion, with sample armor and weaponry. Gear is a huge part of DDO, and the Character Planner allows for the complicated system in a strikingly simple way. All available gear upgrades can be input into the Planner by starting with a base item and adding the relevant bonuses and upgrades. The Planner even allows for named items.

You'll find one last tool in the Character Planner: the calculator. This allows you to plan ahead a bit more -- this part of the tutorial is a bit less detailed than the others, but don't blow past it. Read through and experiment with it a bit to get a feel for it.

So you've got the perfect build and want to save it, show it off, or maybe submit it for feedback and suggestions from more experienced players. Since it's kind of a pain to try and explain it all to someone, there are three output methods set up in the Planner. Saving and printing are pretty simple -- and printing a hard copy is a good idea so you'll have it handy when you're leveling up.

Exporting a build to the forum is a bit more complicated, but as always Ron comes through with a clear and detailed walkthrough. It's worth it to take the time to learn, because your fellow players are going to be your biggest help in DDO.

So there is a short breakdown of the parts of the DDO Character Planner. I view this as one of the most valuable tools in the game, and if you're unfamiliar with it, you're missing out. Give it a try, give the creator a hearty thank you, and enjoy!

Exploring Eberron is a novice's guide to the world of Dungeons and Dragons Online, found here on Massively every Friday. It's also a series of short summaries of lower-level DDO content, cleverly disguised as a diary of the adventures of OnedAwesome, Massively's DDO guild.