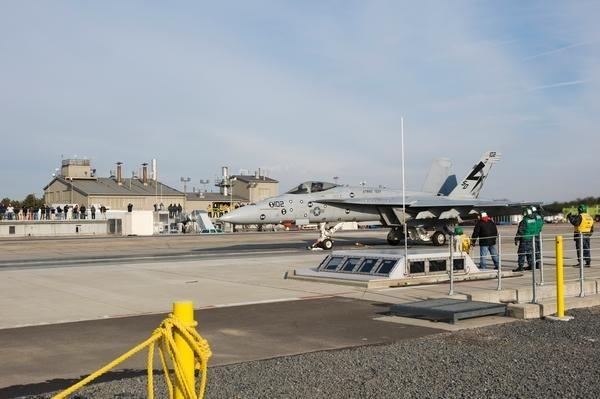 For more than 50 years, the on-ramp to the highway to the danger zone was a steam catapult that launched fighter jets from an aircraft carrier, but it looks like that could soon be set to change. The U.S. Navy just announced yesterday that its Electromagnetic Aircraft Launch System, or EMALS, has passed a key test by launching a manned F/A-18E Super Hornet for the first time (several more successful launches then followed). Among other advantages, that system promises to allow the Navy to launch a wider range of aircraft from a carrier -- including everything from lightweight unmanned aircraft to heavy strike fighters -- and do so while also bringing "substantial improvements" to weight, maintenance, and efficiency. Head on past the break for the official announcement (sorry no video).

Update: We spoke too soon, video is now after the break! You'll have to supply your own Kenny Loggins soundtrack, though.

The Navy has been using steam for more than 50 years to launch aircraft from carriers. Saturday, the Aircraft Launch and Recovery Equipment (ALRE) program launched an F/A-18E Super Hornet using the EMALS technology that will replace steam catapults on future aircraft carriers.

"I thought the launch went great," said Lt. Daniel Radocaj, the test pilot from Air Test and Evaluation Squadron 23 (VX-23) who made the first EMALS manned launch. "I got excited once I was on the catapult but I went through the same procedures as on a steam catapult. The catapult stroke felt similar to a steam catapult and EMALS met all of the expectations I had."

"I felt honored to be chosen as the Shooter to help launch the first live aircraft tested on the new EMALS track at Lakehurst," said Chief Petty Officer Brandon Barr, Naval Air Warfare Center Aircraft Division Test Department, Lakehurst. "It was very exciting to knowingly be a part of naval aviation history. Petty Officers 1st Class Hunsaker and Robinson, Petty Officers 2nd Class Williams, Wong, and Simmons, were the sailors on my team who worked together to help make this test a success. We all look forward to seeing this cutting edge technology deployed on the Gerald R. Ford."

"I'm excited about the improvement EMALS will bring to the fleet from a capability and reliability perspective," said Cmdr. Russ McCormack, ALRE, PMA-251, deputy program manager for future systems. "EMALS was designed for just that purpose, and the team is delivering that requirement."

The system's technology allows for a smooth acceleration at both high and low speeds, increasing the carrier's ability to launch aircraft in support of the warfighter.

The system will provide the capability for launching all current and future carrier air wing platforms – lightweight unmanned to heavy strike fighters.

Engineers will continue system functional demonstration testing at NAVAIR Lakehurst. The team will expand aircraft launches with the addition of T-45 and C-2 aircraft next year.
In this article: aircraft, aircraft carrier, AircraftCarrier, danger zone, DangerZone, Electromagnetic Aircraft Launch System, ElectromagneticAircraftLaunchSystem, EMALS, FA-18E Super Hornet, Fa-18eSuperHornet, military, navy, super hornet, SuperHornet, us navy, UsNavy, video, wargadget
All products recommended by Engadget are selected by our editorial team, independent of our parent company. Some of our stories include affiliate links. If you buy something through one of these links, we may earn an affiliate commission.
Share
Tweet
Share