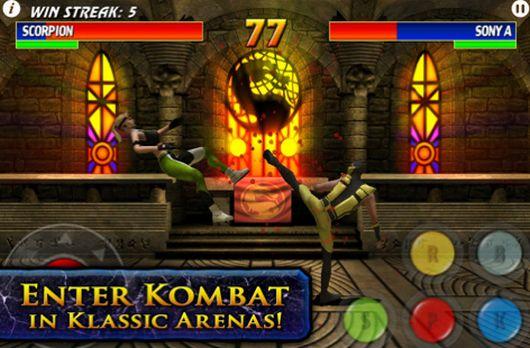 Much like all of that snow outside your door, the App Store's top lists are currently frozen -- Apple will release what's in the top spots on the marketplace tomorrow (after the holiday), but until then, everything's staying exactly where it is. While we haven't seen a lot of numbers just yet, it's clear that EA was a big winner on the App Store this year. The company dropped prices on lots of its titles earlier last week, then claimed a good bit of the top 10, top 20 and the top 200. The rumor is that as soon as it can, EA is going to raise prices back up on these apps, so if you want to grab this recently-released port of Ultimate Mortal Kombat 3 at just a buck, now's your chance.

Some of the reviews on this iOS version of Mortal Kombat are iffy. The port suffers from the usual fighting game problem of having no buttons on the iPhone, so controls don't feel responsive. Often the controls actually aren't responsive, though there is an S button to make some of the more common moves easier to pull off. But for just a dollar, playing UMK 3 right there on your iPhone is pretty awesome.

Whether or not you agree with EA's stunt -- some say it was a cheap way to get some attention, while others say apps are worth what people will pay for them -- I do think it's pretty impressive that a big, traditional gaming company found an interesting way to take advantage of Apple's usually eclectic marketplace. We'll have to see if other bigger studios pick up on this kind of thing in the future, or if indie developers can find a way to take advantage of it.

In this article: app store, ea, Electronic Arts, frozen, gaming, iOS 4, Ios4, iPhone, Mortal Kombat, tuaws daily app, tuaws-daily-app, TuawsDailyApp, ultimate mortal kombat 3
All products recommended by Engadget are selected by our editorial team, independent of our parent company. Some of our stories include affiliate links. If you buy something through one of these links, we may earn an affiliate commission.
Share
Tweet
Share