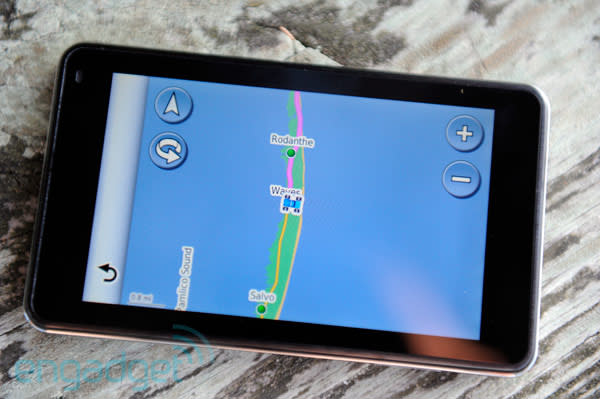 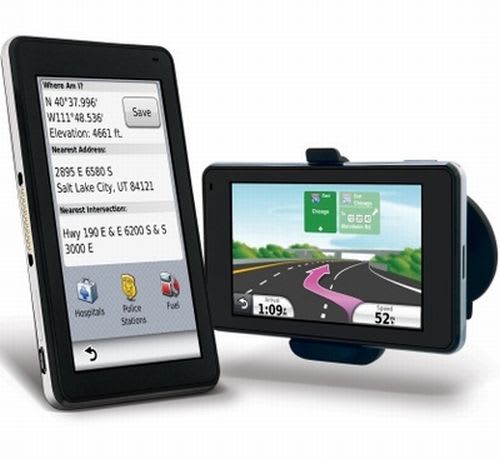 For the most part, standalone navigators have retained their same form factor for the better part of the last five years. Each one looked like the other, with the main differentiators being a fold-out or integrated antenna and a big or small display. With intense competition coming from the smartphone space (yeah, we're looking at you, Google), the bigwigs at TomTom and Garmin are obviously thinking of ways to innovate and keep their consumer PNDs relevant. We aren't exactly convinced that shaping said navigators like said smartphones is the best answer, but you won't find us kvetching about the sleek lines and slim nature of the nüvi 3790T. Announced back in April alongside the 3760T and 3750 models, the king of the 3700 series packs a 4.3-inch WVGA multitouch display and a frame that's just 9mm thick; what you're left with is the most stunning personal NAV system on the planet, and we've had the opportunity to test one out before it hits US shelves in July. Care to see if this beaut is worth $449? Head on past the break for our two pennies (and a video overview, too!).

How would you rate the nuvi 3790T?
We want to hear what you think. Post a quick review now to join the conversation!
Write a review


So, what's new here? For one, a capacitive multitouch display. We'll confess that Garmin's "older" nüvi screens (yeah, those resistive ones) were some of the best resistive panels we've ever touched, but having access to this is a real treat. Our only niggle with the display is how stunningly glossy it is, making it somewhat difficult to use outdoors where it's obviously shaped to be used. Then there's free lifetime traffic alerts (appreciated, but not a new concept), an integrated antenna, the company's own EcoRoute and nüRoute services and a somewhat overhauled interface. The 2D and 3D maps are gorgeous, and they certainly load more quickly than on older, slower devices. We also noticed that town and street names auto-populated at a blazing pace, but there's one thing that wasn't quite so snappy -- more on that here in a second.

The design, as we alluded to, is just striking. This device has easily set the bar for PNDs going forward, and given that it's around the size of an EVO 4G, it's easily pocketable and perfect for carrying around in new cities where you're either without your smartphone or in a country where using that precious data would be prohibitively expensive. The display itself, while far too glossy, is simply magnificent to gaze at. It's sharp as a tack, bright and has stellar viewing angles. The touch response was also satisfactory, though the pinch-to-zoom capabilities often required a bit more pressure than we would've preferred. The inbuilt accelerometer worked like a charm, with screen orientation changes taking mere seconds to occur after we made the tilt.


We're also thrilled to see Garmin taking advantage of the extra pixels; the WVGA (800 x 480) resolution allows the outfit to place four information boxes on the side of the map while navigating (and while just looking at a map without any route plugged in). Things like elevation, driving direction, current time, current speed (and speed limit), time to destination and distance to destination can be selected, and you can arrange the boxes and information as you please via a simple press. The speed limit indicator was shockingly accurate; we'd pass a new speed limit sign, and two to three seconds later it was reflected on the 3790T. There's also two specific ways to route -- you can select automobile or pedestrian, and then customize options within each. This is a real boon for city dwellers who spend more time in their PF Flyers than in their Honda Fit, and you can even enable bus, train or metrotail services (individually) in order to mix that into your commute.

Overall, the software tweaks are much appreciated, and the overall speed of the system is laudable. But there's one issue we simply can't shake: the guide. We've been listening to the same female robot tell us where to turn and just how flustered she is to be "recalculating" once more for years, and for all the improvements Garmin has made on the coding front, we would've loved a more fluid robotic voice that can enunciate street names with the intelligence of an 8-year old. Those who had a nüvi now will be all too familiar with the factory installed voices, and while they definitely get the job done, they certainly aren't a big leap forward. We should also mention that the Voice Command feature is pretty solid. Microsoft's SYNC system has always left us sorely disappointed, and Garmin's implementation is markedly superior. You still have to speak slowly, and it's really only useful for finding nearby places or addresses that you've already got saved (i.e. you won't be using your voice to spell out a full address for the first time or anything), but it's a nice extra. If we could speak at a normal rate and have it recognize us, it'd be perfect; as it is, we'll just pretend that we needed to work on our public speaking skills, anyway.

So, our other major gripe? The speed at which this thing finds a GPS fix. We tested it out in a number of cities in a number of states, and we never could get it to find a solid lock in under a minute or three. That may not sound like a lot, but when you're buckled in and ready to roll, watching that "Acquiring Satellites" bar sit for any number of minutes is really annoying. Making matters worse, the 3790T seems to lose its fix far more quickly than our trusty nüvi 350, forcing us to see that message pretty much anytime we switched the ignition off and then back on. It also seemed to take its sweet time when calculating routes, but once it was finally ready to direct, everything else was lickety-split. 'Course, we could be spoiled by the overall quickness of the system when becoming frustrated by the lack of speed in the GPS lock, but hey, there it is.

Garmin throws in a simple car mounting kit, a USB cable and a car cigarette adapter, but it's on you to locate a screen protector of some sort if you think this will end up in your pocket, backpack or purse on a semi-regular basis. We should also mention that the battery life here is rather great given the lack of room for a bulky cell and the fact that it remains on the entire time while navigating; Garmin claims that you can see four hours on a full charge, and on two test occasions we hit just south of that. As for the actual navigation? We still think Garmin's software is the best around, and while we did grow frustrated with its choice of road a time or two when avoiding a street closure near ESPN's campus, it managed to get us where we needed sans fuss the vast majority of the time. If you've used a nüvi before, the navigation functionality will be extremely familiar, but aside from the refined pedestrian options, lifetime traffic alerts and built-in EcoRoute functionality, there's not a lot here software wise to encourage an upgrade.


Is the nüvi 3790T worth $449? If you're in the market for a standalone navigator, yes. It's the sleekest, most refined PND on the market, and the feature set leaves little to be desired. If you've already got an Android device that gets you from point A to point D effectively, the 3790T is a far tougher sell. Despite being sleek enough to carry around as you would a smartphone, it's still difficult to justify carrying both this and a NAV-infused smartphone. Is it worth an upgrade? If you're using a TomTom unit, the answer is an emphatic "yes." If you're using a relatively recent nüvi, probably not. There's no major mapping changes here, and you're still stuck dealing with the same robotic gal telling you just how far away your next turn is. Still undecided? Mash play on that video above.
In this article: 3790t, feature, features, garmin, garmin nuvi 3790t, GarminNuvi3790t, gps, nav, navigation, navigator, nuvi, nuvi 3790t, Nuvi3790t, review, video
All products recommended by Engadget are selected by our editorial team, independent of our parent company. Some of our stories include affiliate links. If you buy something through one of these links, we may earn an affiliate commission.
Share
Tweet
Share