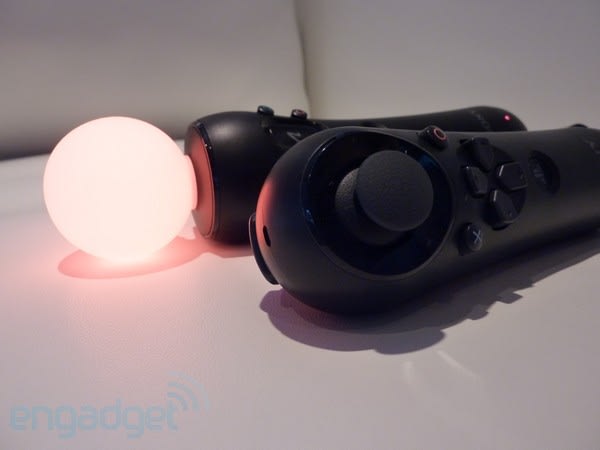 Sony's PlayStation Move was hardly the surprise of the show, after all we've been seeing it waved around in various forms for years. Likewise the price ($99 for a bundle with an Eye Toy camera and a game) wasn't exactly a shocker. Still, the release date of September 19th is earlier than anticipated, and the wealth of titles supporting the gadgets was a little unexpected too. We had a chance to sit down (and stand up) with a few of the best, and we're generally pleased. Move on after the break for our full impressions.


In your hand both halves of the Move controller (the Move and the analog-stick endowed Navigator) have the same sort of light, almost empty feel as the PS3's Dual Shock controller. But, they certainly don't feel flimsy, giving a solid, durable feel in the hand. Triggers and the primary button on the Move fall to hand quickly, but the PlayStation's four iconic face buttons are a little too small for our tastes. That said, we're guessing after an hour or so they'll fall to hand (or, rather, to thumb) just as naturally as they do now.

Sony seems to be making an attempt at getting ahead of the third-party accessory crazy that Nintendo kicked off by offering its own charging stand (pictured above) and even that goofy looking ray gun. (Though that isn't stopping Nyko from trying.) These we didn't get a chance to play with, but we get hands-on with a number of games, including:

Overall PlayStation Move is hardly a reinvention of gaming and is flirting dangerously with gimmick status. But, for certain games (golf, SOCOM) Move makes a heck of a lot of sense. Right now, for others, it's rather less compelling, but we're guessing the true beauty of this won't be realized until sometime next year. The technology is certainly solid, the accuracy impressive, and the responsiveness, while not perfect, is good enough (and better than we're seeing on Natal right now). We're definitely looking forward to downing some tangos in SOCOM this fall when Move gets moving, and if we can reduce our golfing handicap while we're at it that won't be a bad bonus. Oh, and for more details on these games, check out Joystiq's coverage of the Move.