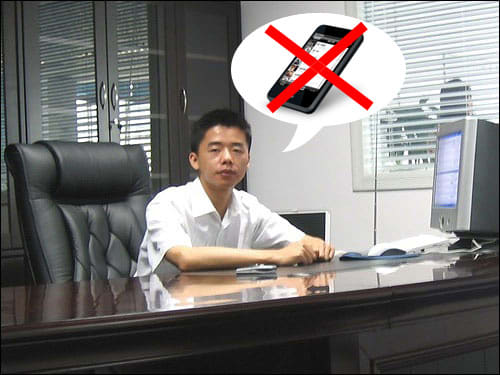 Well, can't say we didn't see this coming; we're just surprised that it's taken this long for Meizu to take a hit over its notorious handset. In case you have no idea what we're talking about, earlier this month said Chinese company's been in heated talks with Apple due to the M8 smartphone bearing an "appearance roughly similar" to the iPhone. Seriously, that's the only reason Apple provided for the accusation, if CEO Jack Wong is to be trusted (and hey, he did kinda ask for it). Anyhow, the latest development is that Meizu's bowing to pressure from both the provincial intellectual property office and Cupertino, and announced that it's shutting down production lines for its flagship M8 this month. This is no doubt a big blow to the company, but it might get even nastier -- here's what Jack said in one of his many frustrated forum postings:

Apple requested that we cease manufacturing the M8 this month, we agreed but then [Apple] came back and asked for a sales ban instead. I can cope with a production freeze, but not with having our shops closed and thus not being able to use up our inventory. If Apple and the provincial IPO take another insatiable step, I can only go head to head against them.

So, it looks like the M8's all set for an early retirement, either way -- it doesn't look like Apple's going to let this one go easily, and Jack's also expressed concern over the fact that the IPO has the power to shut his factory down without going to court. That said, things are still looking positive for the elusive M9 -- from the sounds of it, Meizu's upcoming Android phone isn't affected by this takedown (yet); but the question is whether Jack and co. can keep the shops running until a December launch for their next flagship device. Oh well, hang in there, Meizu!
Via: Electronista, Meizu Me
Source: Meizu BBS
In this article: android, apple, cancelled, china, copyright, copyright infringement, CopyrightInfringement, discontinued, intellectual property, IntellectualProperty, iphone, IPO, jack wong, JackWong, killed, m8, m9, meizu, meizu m8, meizu m9, MeizuM8, MeizuM9, mobile phone, MobilePhone, negotiation, phone, smartphone, talk, windows ce, WindowsCe
All products recommended by Engadget are selected by our editorial team, independent of our parent company. Some of our stories include affiliate links. If you buy something through one of these links, we may earn an affiliate commission.