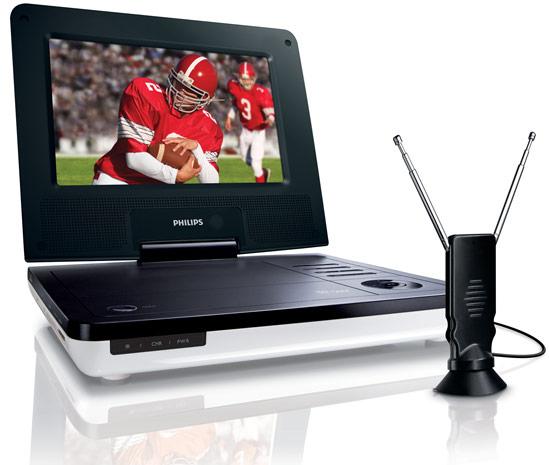 In recent years, Philips has strayed somewhat from introducing products catering to the North American marketplace. We're thrilled to say that this year's spate of CES announcements signifies a stark turn from that approach. The most interesting release from the company during this year's blowout is probably the PS725 (shown above), a 7-inch portable DVD player that doubles as a mobile TV viewer. Before you bust out the yawn collector, you should know that Philips managed to stuff both an ATSC and an ATSC M/H tuner within, the latter of which just announced a major push into 20 major metropolitan markets back in November. The unit has an 800 x 480 resolution display, three hours of nonstop playback via a rechargeable Li-Polymer battery pack, a screen that swivels 180 degrees and a $299 price point. It'll ship in March, just as your FLO TV service keels over. In related news, the outfit is also outing a PB9013 portable Blu-ray player, which touts a 9-inch display, a battery good for three hours of enjoyment, a bundled mounting kit and an HDMI output. You'll also see this one ship in March, but with a $399 retail sticker.

Outside of those two, we're told that the GeGear Muse MP4 player is now on track to ship in March, with the 8GB model going for $149, the 16GB edition for $179 and the high-end 32GB model for $229. For those out of the loop, it'll deliver a 3.2-inch HVGA touchpanel, an FM radio tuner, 720p movie support and compatibility with FLAC and APE lossless files. Closing things up, we've got the Fidelio DS8550 and DS9010 speaker docks. The former handles your iPod, iPhone and / or iPad, streams tunes over Bluetooth and touts a built-in, rechargeable battery; this guy's on sale now for $299. As for the latter? That one's expected to ship at the tail-end of March for $599, with the price premium netting you an aircraft quality aluminum enclosure, improved audio drivers and a proximity sensor to activate a backlit control panel. Bullet points after the break, per usual. The lifestyle product range at CES includes Fidelio audio docking speakers for people who appreciate pure, authentic sound quality; a family of smartly styled notebook and mobile device accessories designed specifically for consumers who are on-the-go; and essential accessories for HD buffs who want to enhance and protect their home theater experience.

"There's no shortage of products in the consumer electronics space, so Philips differentiates by striking the perfect balance between performance, aesthetics and ease of use," said Jacopo D'Alessandris, senior director, Philips Consumer Lifestyle North America. "We are honored to receive five CEA Innovations Awards, which validates our passion for innovation and commitment to designing for simplicity."

Born from an obsession with capturing pure, authentic sound, Philips offers a range of audio products that produce music in the way the artist intended. Philips range of Fidelio docking speakers will turn any living space into a concert hall and the Philips GoGear Muse portable audio and video player offers the same exciting sound experience while you're on the go; filling your ears with sound you can actually feel.

* Fidelio Primo Docking Speakers – Built with premium components, Fidelio Primo incorporates Philips' proprietary SoundCurve design, a curved back cover which creates an optimal and highly effective structure for acoustics that results in more precise and natural sound reproduction. In 2011 the Fidelio Primo will be available in the original version with natural wood and in a new, premium design with metal casing.


* Fidelio Lifestyle Docking Speakers for the iPad™, iPod™ and iPhone™ – The smart and sleek Fidelio docking speaker line delivers stunning sound from an iPad®, iPod® or iPhone®. New for 2011, Philips introduces a full range of Fidelio docking speakers in different styles that fit seamlessly into the home. Each one producing a similar outstanding sound through high-end features and full range of speakers.


* The Philips GoGear MUSE – The award-winning GoGear MUSE portable audio and video player continues to surprise with new sound features in this third generation model. A combination of Philips patented FullSound™ technology, surround sound for movies and sound isolation headphones offer an unrivalled entertainment experience. New features for 2011 include 'SafeSound', which lets you to enjoy music to the max while helping to protect your ears and 'LikeMusic', that lets users manage a large music database to easily create their perfect playlist.

Industry-leading performance, practical features and stylish design are built into a broad range of Philips products for consumers on the go, including:

* Philips ChargeOn – A slim battery pack that goes anywhere and attaches to the iPhone and most other mobile phones for a quick boost or a full charge. ChargeOn comes with a cable for charging via a computer or existing USB charger, and works with the ChargeOn base for effortless wire-free charging.


* Philips O'Neill Headphones – Through a partnership with O'Neill, the original California surf, snow and youth lifestyle brand, Philips has created a new range of lifestyle headphones – The Stretch, The Snug, The Covert and The Specked. These ultra-durable headphones have been tested on the toughest O'Neill team riders to meet the demands of those who are performance-driven and live life to the max.


* Philips Mobile Phone and MP3 Accessories – Accessories that effortlessly enhance your ability to stay connected while on the go. As the first producer of iPod cases, Philips applies years of experience in case design to deliver simple, smart, stylish solutions that just work.


Enhance and Protect the HDTV Experience

Philips helps HDTV fans get the enjoyment they expect from their home entertainment and safeguard their equipment with a range of essential accessories to enhance and protect their investment. From high-speed HDMI cables that replicate the digital cinema systems used in movie theaters and the Philips Simply Straight Wall Mount for leveling a flat-panel television as easily as a picture frame, to easy set-up universal remote controls, energy-saving surge protectors, and an environmentally friendly screen cleaner, Philips brings sense and simplicity to the HDTV experience.

At this year's CEA Innovations Design and Engineering Awards program, Philips was honored with five awards. The program recognizes the most innovative consumer electronics (CE) products in the industry's hottest product categories. These are the winning Philips products:

To learn more about Philips' latest innovations in consumer lifestyle products at CES, follow us on Twitter at #PhilipsCESLounge, online at pulse.philips.com or visit www.philips.com/media. Members of the media are invited to visit the Philips Consumer Lifestyle Lounge at the Venetian Hotel, Toscana 3702 on Jan. 5 - 8.