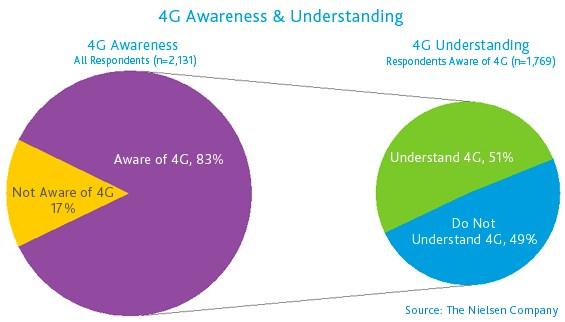 We've certainly seen our fair share of 4G devices in the Las Vegas sun (well, convention center) this year, but as you might have guessed, a recent study finds that increased awareness does not necessarily equal increased understanding. As the Nielsen Company recently discovered, the majority (54 percent) of consumers who know or care about 4G were relying on the old International Telecommunications Union definition of mobile data speeds over 100 Mb/s, even though carriers have sort of been making up their own rules (for instance, T-Mobile and AT&T are calling their HSPA+ networks 4G). And what to make of the large percentage of people who think that 4G somehow refers to the iPhone 4? That one's a perpetual head-scratcher. But in the end, the study finds that none of that really matters: almost three in ten consumers are gearing up to buy a 4G device within the next twelve months. And \that's what really matters, right?
In this article: 4g, consumer, consumers, hspa+, Nielsen, research, shocker, study, survey
All products recommended by Engadget are selected by our editorial team, independent of our parent company. Some of our stories include affiliate links. If you buy something through one of these links, we may earn an affiliate commission.
Share
Tweet
Share