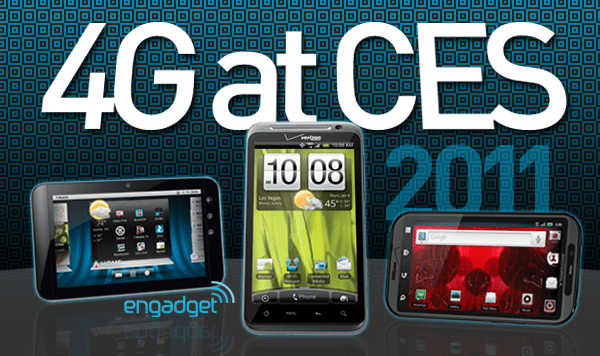 Traditionally, CES isn't a huge mobile event -- the biggest phone news has historically been saved for MWC in February and CTIA in March -- but that changed in a huge way this week. Looks like 2011 is shaping up to be the year of 4G, and both carriers and manufacturers alike wasted no time jumping on the hype bandwagon with a variety of announcements that promise to make the next few months exciting... and really, really fast. AT&T kicked things off early in the show, but it was just the beginning of a relentless torrent of mobile news that lasted for days and ultimately left us with a pile of devices and network upgrades that should take us at least through the middle of the year. Read on for the recap!

AT&T. America's second-largest carrier followed the same CES format that it spearheaded last year, hosting an off-site Developer Summit that marries third-party developer events with network and device news from AT&T itself. The headline item here was the company's decision to rebrand its HSPA+ network as 4G, likely bowing to pressure from the other top-tier US carriers -- all of whom have already begun using the term "4G" to describe their latest networks -- while also emphasizing that LTE still factors prominently into its 2011 plans. Both HSPA+ and LTE phones will be branded 4G from here on out, with a total of 20 or so planned for the year -- HSPA+ in the first half, LTE coming into the mix in the second half around the time that AT&T's first LTE markets go live.

Dell. Looking like a grown-up Streak, the new Streak 7 is T-Mobile's first "4G" tablet thanks to HSPA+ compatibility -- something that the Galaxy Tab lacks. As the name implies, it's a 7-inch model and features Android 2.2 paired with Dell's so-called Stage skin; it's not as exciting as the Honeycomb-based G-Slate from LG, granted, but this one is launching in the next few weeks... and something tells us it's going to be priced pretty aggressively.

HTC. Despite the full name of the event -- International CES -- HTC's announcements here were strictly for the US market and were run entirely by the carriers launching the products; no sign of a tablet or any new European products. The Thunderbolt is the most interesting of the bunch, essentially a reworked EVO 4G for Verizon with an improved SLCD-based display (still 4.3 inches, of course), a kickstand with integrated loudspeaker, and 700MHz LTE support in place of the EVO's WiMAX. Speaking of 4.3-inch devices, AT&T announced the Inspire 4G, which is virtually identical to the Desire HD launched in Europe a few months ago -- they've just swapped out the radio for another one that's capable of operating on AT&T's HSPA+ network.

Moving a little downmarket, the long-rumored EVO Shift 4G finally became official on Sprint, billed as a "little brother" to the original EVO 4G with a small screen, lower-res primary camera, and a sliding landscape QWERTY keyboard. HTC also removed the front-facing cam altogether -- ostensibly in an effort to keep the cost capped as much as possible -- which means you won't be doing much video calling, but you will be paying less than any other WiMAX phone currently available on Sprint. Finally, one announcement that falls outside the wide-reaching 4G umbrella: the Freestyle shores up the very bottom bracket, becoming HTC's first Brew MP-based phone to launch in the US; it's got a 3.2 megapixel camera, 3.2-inch HVGA touchscreen, and an implementation of Sense that's almost convincing enough to make you forget it's not really a smartphone.

LG. LG was one of the few manufacturers to show a European phone at CES this year, the 9.2mm-thick Optimus Black. Though it's not a 4G device, the Black should have implications that extend into LG's 4G line at some point soon thanks to its use of a "NOVA display," LG's terminology for a new type of ultra-bright, power-efficient LCD that offers 700 nits of luminance while holding on to outdoor readability better than an AMOLED can. Turning our attention to the 4G gear, LG showed the Revolution for Verizon's LTE network looking fit to do battle with the HTC Thunderbolt thanks to a 4.3-inch SLCD and an 8 megapixel camera.

The most intriguing LG at the show, though, might actually be a tablet: T-Mobile very briefly teased the G-Slate, an Android Honeycomb-based tablet. Unfortunately, we have no idea when it might arrive or how much it'll cost.

Motorola. Without a doubt, Moto was the breakout star of CES this year thanks to a four-pack of new devices -- all branded 4G -- that left jaws dropped across Vegas and the greater Clark County metropolitan area. The Atrix 4G for AT&T would arguably be the most interesting of those four simply because it's the most stunningly muscular phone ever produced: on top of a 1GHz dual-core Tegra 2, it's got 1GB of DDR2 RAM, HSPA+, a whopping 4-inch 960 x 540 display, and an integrated biometric scanner on back that doubles as a power button. Perhaps more amazingly, though, it's compatible with desktop and laptop docks that basically turn the phone into a Linux-based PC that offers a full implementation of Firefox 3.6 along with an Android environment that can run all your mobile apps.

Though not compatible with the docks, Motorola's other high-end Android phone here at CES -- the Droid Bionic for Verizon -- isn't much less amazing. It's got a 4.3-inch 960 x 540 display and the same dual-core processor as the Atrix, but adds LTE compatibility for Big Red's 4G network. For T-Mobile, the Cliq 2 replacing the aging Cliq -- Moto's first Android phone, you might recall -- and offers compatibility with HSPA+ paired with a 3.7-inch 854 x 480 display and a sliding landscape keyboard. It's not high-end by any stretch, but it should slot in nicely below the G2.

Finally, Motorola became the launch partner for Google's tablet-centric Android 3.0 Honeycomb release with its introduction of the Xoom for Verizon, a 10.1-inch tablet with a pair of 1GHz cores provided by NVIDIA. Though it won't have 4G compatibility at its initial first quarter launch, it'll be upgradeable to LTE in the second quarter of the year -- a pretty rare show of hardware upgradeability in the industry.

RIM. Waterloo had just one announcement at CES, though it was a pretty big one: Sprint has partnered up to offer a WiMAX-capable version of the upcoming PlayBook tablet, dubbed -- what else? -- the 4G PlayBook. It becomes RIM's very first cellular PlayBook to be announced by any carrier, though it's got one big limitation: it lacks backwards compatibility with CDMA / EV-DO, instead tethering to your BlackBerry phone or picking up a WiFi connection when WiMAX isn't available. It'll be available at some point this summer, which should put it a bit behind the launch of the WiFi-only version.

Samsung. 4.3 inches not big enough for you? Samsung pushed the envelope at CES with its announcement of the 4.5-inch Infuse 4G for AT&T, an Android phone that makes use of Sammy's upgraded Super AMOLED Plus screen technology for better contrast and outdoor readability than the original Super AMOLED used on the Galaxy S series last year. Though it doesn't go dual-core like Motorola's Atrix 4G, it boosts the well-received Hummingbird processor up to 1.2GHz and features an 8 megapixel camera on back along with a 1.3 megapixel unit in front. Verizon, meanwhile, took delivery of an unnamed LTE model -- the SCH-i520 -- with LTE, a 4.3-inch Super AMOLED Plus screen, 8 megapixel cam, and front-facing 1.3 megapixel shooter for video calls. We're not sure why it doesn't have a name yet, but we'd love to hear your suggestions on what it should be called. The company also contributed a MiFi-like mobile hotspot with both CDMA / EV-DO and LTE compatibility for Verizon; most (if not all) of the company's LTE handsets will support WiFi tethering, but we're sure it'll find a market of its own.

On the Tablet front, Sammy didn't have anything related to Honeycomb here -- but it put out a minor spec bump on Verizon's Galaxy Tab by adding LTE support, a 1.2GHz processor, and a higher-res rear camera (5 megapixel, up from 3). No word on pricing or availability yet, but its existence certainly explains why the original Verizon Tab dropped in price recently.

Sprint. Though it didn't hold its own press conference, Sprint was active at the show on three fronts: the HTC EVO Shift 4G (pictured), the 4G PlayBook from RIM, and Novatel's 3G / 4G MiFi. All told, they weren't blockbuster announcements by any stretch -- but the new MiFi is a nice spec bump that gives users a smaller, sleeker alternative to the year-old Overdrive hotspot; it launches next month.

T-Mobile. Though it announced Motorola's Cliq 2, Dell's Streak 7, and the G-Slate from LG, T-Mobile USA spent much of its CES presence talking up the improvements it's been making to its HSPA+ network -- a network it insists is 4G. Reaching over 200 million people at 21Mbps today, they'll be deploying 42Mbps downlink connectivity across two-thirds of their HSPA+ footprint in 2011, and the technology allows them to ultimately scale up past 600Mbps in the long term -- in other words, it's pretty clear they're trying to emphasis that LTE doesn't need to be in the short-term plans to enjoy extremely high speeds.

Verizon. Big Red's CES presence was all about LTE, announcing four 4G phones plus Moto's Xoom tablet, a high-octane lineup seriously challenged only by AT&T's. That blowout clears up the plate for the company to likely announce the iPhone this week -- and suggests that Verizon customers are going to have an awesome year for smartphone selection.