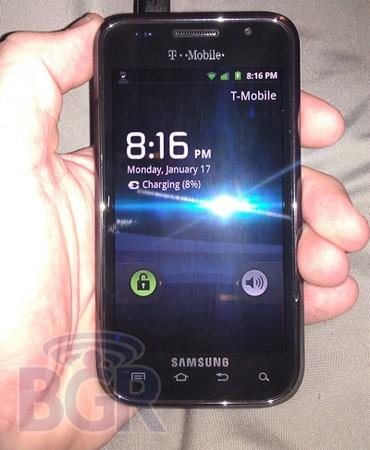 Perhaps Samsung's Vibrant 4G won't be tied to Froyo, after all. Although the initial leak suggested Android 2.2, Boy Genius Report's managed to obtain what it suggests is an in-the-wild shot with a lock screen that looks remarkably reminiscent of the aesthetic touches from Android 2.3 Gingerbread. No TouchWiz UI here, but word on the street (i.e. from its source) is Sammy's hard at work to remedy that disconnect and make the skin jibe with the new version. And if that's not enough, TmoNews is claiming a leaked document that indicates Vibrant 4G will launch February 23rd. Back to the picture, though: if that timestamp is at all accurate, and this is really just hours fresh, perhaps that lucky right-handed gent can snap a few more convincing shots while it charges.

Update: As a number of readers have pointed out, there's some odd discrepancies between this image and the Gingerbread lock screen we all know, chief among them the inclusion of AM / PM in the top bar (that option doesn't exist in actual 2.3. we just checked to be sure). Brief Mobile's got a more nuanced breakdown, but the point is, this looks to be either a half-baked ROM or the work of a certain Robin Goodfellow.
In this article: 4g, in the wild, InTheWild, itw, leak, leaks, rumor, rumors, samsung, t mobile, t-mobile, TMobile, vibrant, vibrant 4g, Vibrant4g
All products recommended by Engadget are selected by our editorial team, independent of our parent company. Some of our stories include affiliate links. If you buy something through one of these links, we may earn an affiliate commission.
Share
Tweet
Share