Microsoft outlines its plan to become carbon negative by 2030 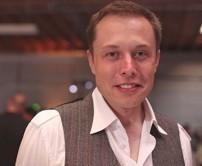 Apparently when Elon Musk was talking last week at the Cleantech Investors Summit, the Tesla CEO's prognosticating extended far past 2015. He reiterated that there's an electric Model X SUV coming soon and a sub-$30k Tesla within four years. However, in 20 years Mr. Musk thinks that everything will be EV -- well, everything in the US, anyway. He believes that every car sold in America in 2030 will be electric and that within a few decades after that they'll take over worldwide. Of course, this is someone who believes he'll be living on Mars in 2030, naturally sent thither astride one of his SpaceX rockets. Obviously not a man short on optimism.

In this article: 2030, electric vehicle, ElectricVehicle, elon musk, ElonMusk, ev, future, musk, tesla, tesla motors, TeslaMotors
All products recommended by Engadget are selected by our editorial team, independent of our parent company. Some of our stories include affiliate links. If you buy something through one of these links, we may earn an affiliate commission.
Share
Tweet
Share