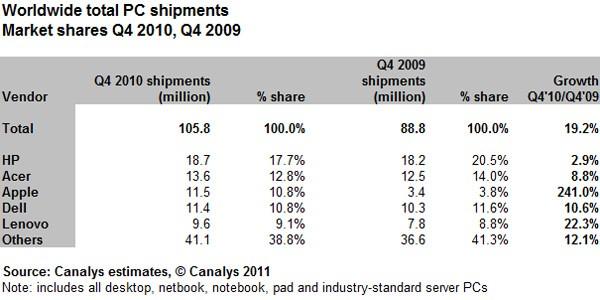 Canalys is a pretty well respected global stat-keeper and now it seems to be relying on that reputation to push through a pretty controversial message: tablets, such as Apple's iPad and Samsung's Galaxy Tab, are PCs. "Accept new market realities," urges its polemic press release, before laying out global quarterly shipments that peg Apple as the world's third most prolific PC vendor (without tablets, Apple doesn't even break the top 5 according to IDC and Gartner). The company that was laboring with a mere 3.8 percent market share in 2009 has shot up to 10.8 with the aid of its 10-inch touchscreen device. Canalys' stance will inevitably be controversial, but then it's kind of hard to deny that machines like Samsung's Sliding PC and ASUS' Eee Slate make the distinguishing lines between tablets and netbooks look like a particularly technical form of bokeh.

Canalys today announced strong PC industry growth of 19% in Q4 2010, with Apple climbing to third place in the market, thanks to impressive iPad and Mac sales, as well as fast growth in Asia Pacific. The analyst company attributes the majority of Q4 market growth to the rising demand for pads, a new product category.

'Pads gave consumers increased product choice over the holiday season,' said Canalys Analyst Tim Coulling. 'While they do not appeal to first-time buyers or low-income households, they are proving extremely popular as additional computing devices.'

Canalys urges vendors to accept new market realities, by recognizing pads as an integral new component of the overall PC landscape. Unlike other analyst companies, Canalys incorporates pad shipments, such as the Samsung Galaxy Tab and Apple's iPad, in its total PC market report.

'Pads gave the market momentum in 2010, just as netbooks did the year before,' said Canalys Senior Analyst Daryl Chiam. 'We are encouraging vendors to plan for the future and not to remain stuck in the past.'

'Any argument that a pad is not a PC is simply out of sync,' said Chiam. 'With screen sizes of seven inches or above, ample processing power, and a growing number of applications, pads offer a computing experience comparable to netbooks. They compete for the same customers and will happily coexist. As with smart phones, some users will require a physical keyboard, while others will do without.'

'Each new product category typically causes a significant shift in market shares,' said Chiam. 'Apple is benefiting from pads, just as Acer, Samsung and Asus previously did with netbooks. The PC industry has always evolved this way, starting when Toshiba and Compaq rode high on the original notebook wave.'

At a regional level, Asia, especially China and India, continued to outperform most of the other global markets, to the benefit of Lenovo and Dell. In the United States, sales recovered somewhat, while Europe, the Middle East and Africa remained an ongoing concern due to substantial consumer inventory build-up. Moving forward, inventory issues will be exacerbated by rising VAT levels across five countries – Poland, Latvia, Slovakia, Switzerland and the UK – as well as the urgency created by the upcoming Intel refresh. As a result, Canalys predicts significant retail discounting in this region during the first quarter.

'Recessionary budgets are over for most companies, and IT expenditure is again being used as a catalyst for growth,' said Coulling. 'The performance of the corporate market, however, contrasts starkly with the decline in public sector expenditure in most Western countries. The big service-led companies, which profited greatly from huge government-led contracts, are in for a tough 2011.'

In this article: 2010, analysis, apple, conflation, data, figures, galaxy tab, GalaxyTab, global, ipad, market, market share, MarketShare, numbers, pad, pads, pc, q4, quarter, quarterly, samsung, share, shipments, slate, slates, statistics, stats, tablet, tablets, worldwide
All products recommended by Engadget are selected by our editorial team, independent of our parent company. Some of our stories include affiliate links. If you buy something through one of these links, we may earn an affiliate commission.
Share
Tweet
Share